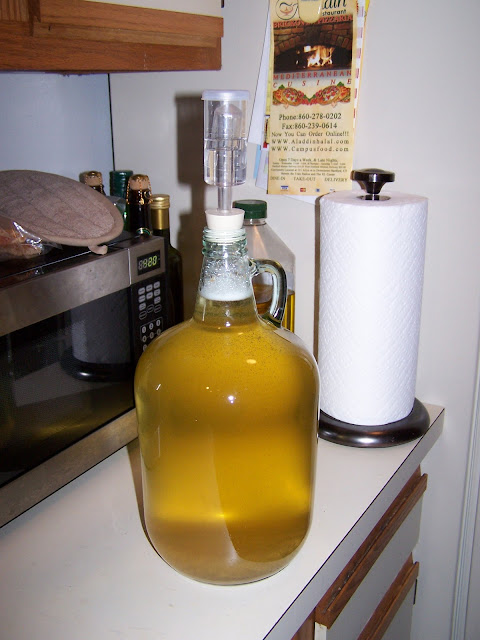 Homebrew Series 1 - Making Mead
Part 3 - Racking the Mixture
After the yeast has worked some of its magic in the brew pot it was time to move it to a jug to continue fermenting. To do this, I siphoned most of the liquid from the pot using a plastic hose, while making sure to leave as much yeast sediment behind as possible. Unfortunately I was unable to siphon and photograph at the same time.
To the jug I added a few cups of water (boiled and cooled) to reach the neck. Now, the jug is sealed with a rubber stopper and an airlock. The airlock is filled with a liquid (in this case vodka, but water, no-rinse sanitizer, or other similar liquids would do), which allows carbon dioxide (a by-product of fermentation) to escape the jug, without allowing air in.
For the next few days the yeast will continue to work its magic. Once the most vigorous foaming has slowed it will be time to move the jug to the refrigerator. Before then, I’ll have to make some room, I’m not sure there’s even enough space with the shelves in.
See the other parts in the series:
Part 1 - Mixing the Ingredients
Part 2 - Pitching the Yeast, Beginning Fermentation
Part 4 - Final Racking
Part 5 - Bottling and Labeling
Posted by Musings on Beer at 4:00 PM