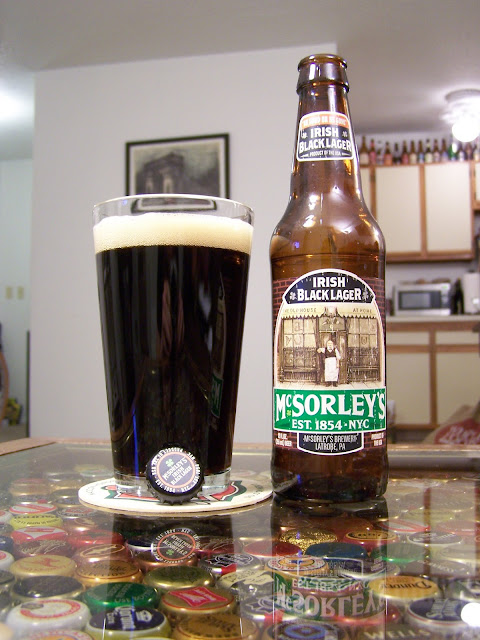 McSorley’s - Irish Black Lager
Purchased From: Harvest Fine Wines & Spirits
Serving Type: 12 oz. bottle, poured into a pint glass
Interestingly enough McSorley’s, which advertises Latrobe, PA on the front of the label and some sort of publick house in New York City on the back, is actually brewed by Lion Brewery from Wilkes-Barre, PA (over 4 hours from Latrobe). Lion Brewery is also the brewer behind Lionshead Pilsner, a staple of cheap drinking in the region. Lionshead has also made at least one cameo appearance on the television show The Office, set in Scranton.
The Irish Black Lager lives up to its name, with a nearly black body and a thin, tan head. The head lasts a few minutes as it slowly fades away to a small layer on top of the beer. No lacing involved. The coffee aroma sits nicely with toasty lager malts. There’s a light charred scent, but the smoke isn’t pervasive on the nose.
When it comes to taste the smoke makes a much fuller showing. The mouthfeel is fairly creamy, but not too substantial. The flavor is pleasing, but a bit thin. The sweetness of the roasted malts works nicely with the smoke and reminds me a bit of Guinness Draught (if it were carbonated, not nitrogenated).
Final Verdict: B-
Posted by Musings on Beer at 4:00 PM