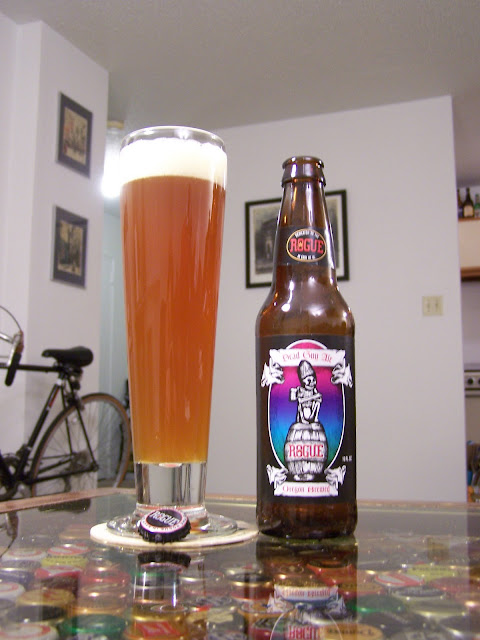 Rogue - Dead Guy Ale
Purchased From: Harvest Fine Wines & Spirits
Serving Type: 12 oz. bottle, poured into a flute glass
Dead Guy Ale is my first experience with Rogue, although I’ve long-admired their distinctive bottles on shelves in package stores, and perhaps my first Oregonian beer. Dead Guy pours a fuzzy muted orange body with a sticky off-yellow-tinted head of foam. The slow-to-fade head produces large swathes of thick lacing. The nose packs bright fruits like hints of pears as well as considerable citrus. Definite notes of grapefruit on this very hoppy nose. Mild alcoholic esters also float from the top of the beer.
The mouthfeel is smooth and airy. The bitter hops are drying and piney. This definitely seems more like a pale ale than the advertised Maibock. This supposed Maibock is brewed with some German ingredients including Maier Munich malt and Perle hops, but I just don’t recognize the likeness to the style. While the beer is quite good, it is dry and tart and almost singularly hoppy.
There are notes of earthiness to it and the malts do come through quite late (after a few minutes to warm). I don’t get the breadiness that many have reported tasting and it doesn’t seem quite so complex. This is a totally competent and enjoyable pale ale, but not quite a Maibock, in my opinion.
Final Verdict: B
Posted by Musings on Beer at 4:00 PM

Email ThisBlogThis!Share to TwitterShare to FacebookShare to Pinterest
Labels: Ale, B, German-style, Helles Bock, Maibock, OR