Narragansett Together At Last - Review Recap 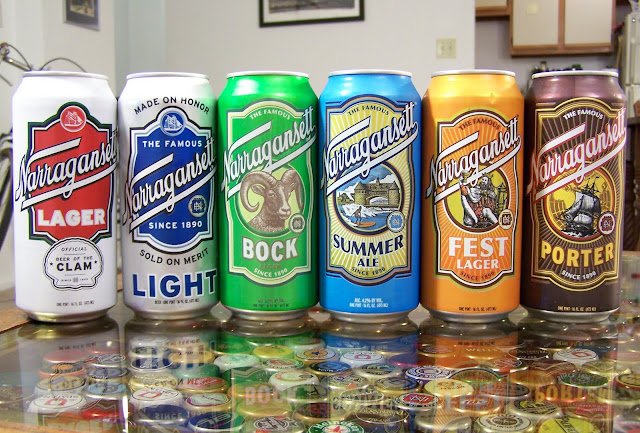 Over the last year of Musings on Beer I've reviewed all of the beers offered by new (old) up and comer Narragansett Brewing Company. After collecting all of the seasonals and saving one tallboy each, I'm finally able to show them all together in their matching glory and think back at all of the reviews I've done.

Originally established in 1890 Narragansett had a good run, over 90 years, of brewing and success in the New England market. Unfortunately, with the advent and subsequent domination of the mega-producers Narragansett Brewery was shuttered and the once popular (sponsor of the Boston Red Sox) Narragansett lager was no more. This is a fate shared by many of the once dominant brands, many of which have been resurrected by Stroh Brewing Company, later bought by Pabst Brewing Company (e.g. Schaefer, Schlitz, and Pabst itself). While the brands exist they exist more in a state of IP holding, produced only through contract brew.

Narragansett's story is similar, yet unique from many of the brands of yester-year. In 2005 the Narragansett brand was purchased and resurrected by one Mark Hellendrung. While each of the beers is contract brewed, the dream is to bring the brand to prominence in the New England market and earn enough to re-open an official Narragansett Brewery. Well-known Genesee Brewing Company of Rochester, NY currently brews the Lager and Light varieties while the limited run seasonals are brewed in Providence, RI and Pawcatuck, CT.

While I wouldn't label any of the brews 'World Class' each stands apart from the competition in their respective groups. The Lager and Light versions stack up favorably to other American Adjunct Lagers and similar Macrobrews. What's more, it is fairly rare for American macro producers to release a series of seasonal ales and lagers. It is even rarer for the beers to come out well-crafted and delicious. To cap it all off, my appreciation for Narragansett, the brand, the beers, and the plan is the storied past and the sheer affordability. Cheaper than most comparable offerings from macros and craft producers these beers are stand outs in their iconic can designs.