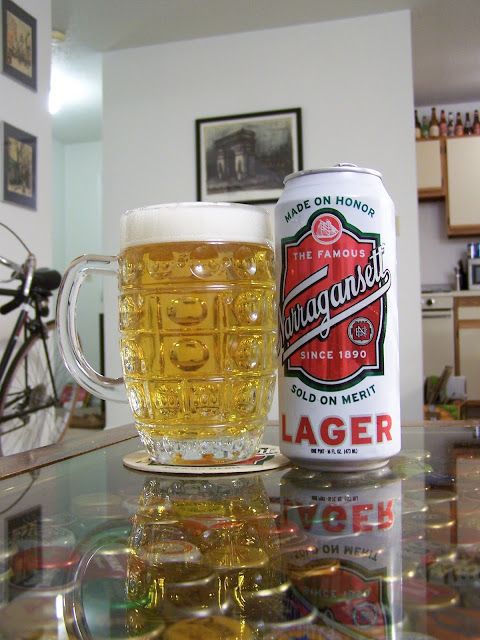 Narragansett Lager
Serving Type: 16 oz. tall boy can, poured into a dimpled mug
Purchased From: Harvest Fine Wines & Spirits
Narragansett is a classic beer that went for years inactive. Recently, the rights to the name were purchased with an eye toward reestablishing the brand in New England. They’re certainly on their way to it, and I’m happy about it. Currently, Narragansett Brewing Company simply markets the beers, which are contract brewed in New York by Genesee Brewing Company. Their hope is, however, that they will someday reopen the brewery in Rhode Island, employing the inspiring catchphrase “Drink your part” to rally the beer-drinking masses.
Narragansett pours with a full-bodied straw color, and some depth of amber tones. The large foam head fades somewhat fast, but leaves light lacing on the glass during its departure. There’s a ton of active carbonation in the glass. The nose is primarily malts with a light must and a scent I’ve come to recognize as solely Narragansett.
The flavor is initially a ton of malts, but soon runs into medium hops for a clear differentiation in flavor. There’s a solid balance here and its well executed. The huge carbonation gives some body to the beer and produces a crisp finish.
Final Verdict: A-*
*This rating is based on my thoughts and opinions of this beer as compared to those similar to it.
Posted by Musings on Beer at 4:00 PM