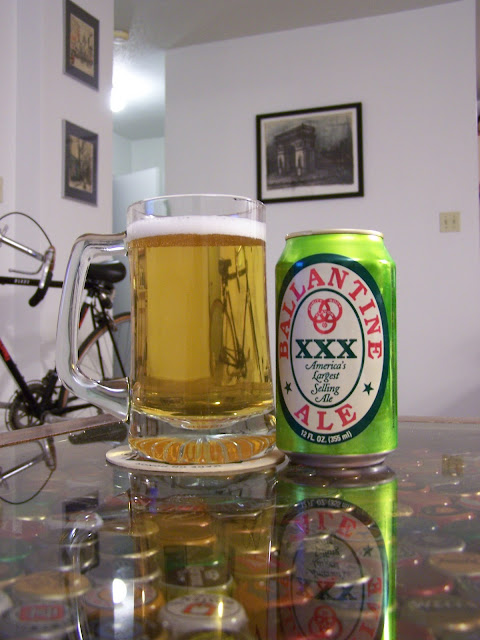 Ballantine XXX Ale
Purchased From: Copaco Liquors & Fine Wines
Serving Type: 12 oz. can, poured into a mug
Finishing up this two-week series is a bonus ale made by a mass-producer. Ballantine was once a well-known label owned by Falstaff Brewing Company. The company was eventually sued during a merger with Narragansett Brewing Company by the State of Rhode Island over antitrust issues. Although Falstaff won, this, combined with declining sales, was a fatal blow to the company.
Just imagine, Falstaff was once the third largest brewer and it was sued over antitrust. How, then, do we have Anheuser-Busch merge with InBev to create AB InBev and SABMiller and MolsonCoors (both themselves products of mergers) join to create MillerCoors? It’s difficult to follow the series of steps that allowed these mergers, but fought to disallow the previous merger without getting a headache. Ballantine, the brand, is now owned by Pabst Brewing Company (one of its many obscure, but historic, labels). This means, of course, that Ballantine is contract-brewed by beer giant MillerCoors.
Either way, onto the goods. Ballantine pours a golden straw color with a small head and minimal retention. Light lacing can be found on the glass. The nose, unlike the long list of lagers reviewed over the past two weeks, has a dry hoppy character and a hint of must. The malt-bomb lagers stand in stark contrast to this ale.
The mouthfeel is light and crisp with high carbonation for an ale. The malts here are light in flavor, providing some sweetness, but they’re overshadowed by potent hops that define Ballantine’s taste. The finish is clean, but there’s a lingering herbal touch.
Overall, it’s very drinkable. It’s crisp, affordable, and it makes a great beer for warm weather. I would, however, advise against buying it from Copaco. They charge an arm and a leg for it. I’m not sure if it is really “America’s Largest Selling Ale” as the can purports, but it fits the bill for mass-market appeal, price, and a good taste.
Final Verdict: B+
Posted by Musings on Beer at 12:55 AM