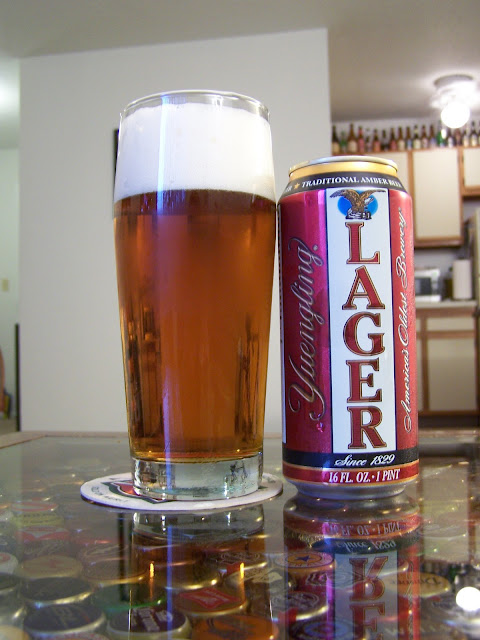 Yuengling Traditional Lager
Purchased From: Beers of the World
Serving Type: 16 oz. can, poured into a Becker glass
Yuengling is a well-known beer in Pennsylvania and the surrounding region. I’m not sure just which states you can find it in, but the list isn’t long. According to the company they’re America’s oldest brewery, and apparently this is logged in national and state registries. I don’t know how to verify this, but I’ll buy it. Good for you Yuengling!
Yuengling Traditional Lager may once have been important in the brewer’s lineup, but was absent until its reintroduction in 1987. Now, it’s the most well-known of Yuengling’s handful of beers. It pours a light foam head with some orange hints. The head stands in stark contrast to the deep amber glow that is the body of this beer. The nose is characterized mostly by a light must.
The flavor comes across medium-bodied, also surprising giving the depth of the beer’s color. The toasted malts provide some layers of flavor and a noticeable sweetness. A selection of hops comes across moderately to help balance the sweet malts. Overall the medium carbonation combines with the characteristic flavor of Yuengling to produce an astonishingly drinkable and refreshing brew.
Final Verdict: A-*
*This rating is based on my thoughts and opinions of this beer as compared to those similar to it.
Interesting Aside: To help weather the storm that was prohibition, Yuengling switched to brewing near-beer products and celebrated its 100th anniversary under such conditions. In another bid to stay profitable, Yuengling also established a dairy operation.
Posted by Musings on Beer at 4:00 PM