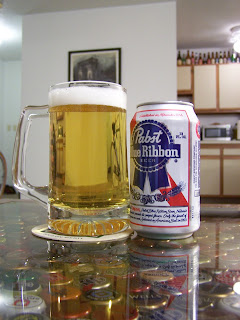 Pabst Blue Ribbon
Purchased From: Gillette Ridge Wines & Spirits
Serving Type: 12 oz. can, poured into a mug
Pabst Blue Ribbon, perhaps better known as PBR, kicks off the next section in the series. American Lagers, not made by the Big Three (which are really the Big Two. More on that another time, perhaps.), well sort of. Pabst Blue Ribbon, seen by many as the underdog of macro brew is only partially so. While PBR is owned by Pabst Brewing Company (it also owns a variety of other lesser-known brands) the brewing is done through contract by MillerCoors (a joint venture of SABMiller and MolsonCoors). Despite this, Pabst controls the specifications, and the results are good.
PBR pours with a full straw-colored body with a very light colored foam head. The head disappears quick under pressure from the very high active carbonation. It does, however, leave a medium amount of lacing on the glass.
The malts are prominent here, but are balanced by a moderate hopping. It’s more than refreshing to notice a balance of flavors in a macro brew. The finish is crisp and clean.
Final Verdict: B+
Side Note: PBR, formerly Best Select, then Pabst Select, takes its name (and its ribbon) from the Chicago World’s Fair (a/k/a World’s Columbian Exposition) of 1893 where the beer was awarded “Best in America.” For more information on the fair read here or check out a great novel filled with history, intrigue, and murder by Erik Larson called “The Devil in the White City.”
Posted by Musings on Beer at 4:00 PM