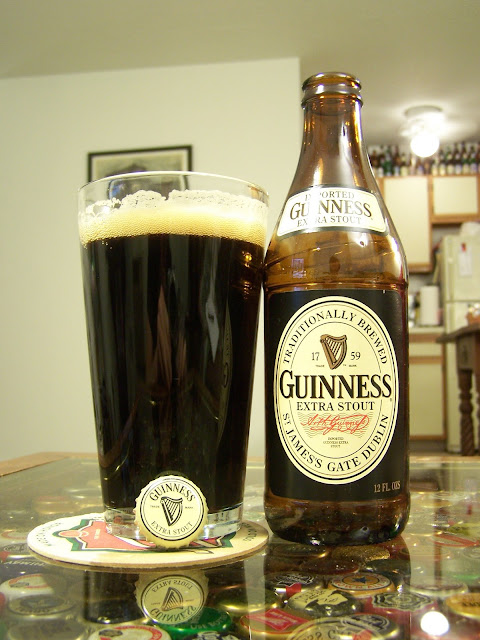 Guinness Extra Stout is the second common variety of Guinness available in the United States. Unlike the Draught variety, the beer is carbonated, so it lacks the signature creaminess of its nitrogenated sibling. Also, unlike its other sibling, Guinness Foreign Extra, Extra Stout isn't quite so strong or full-bodied. It pours a quite-dark brown, bordering on black, with a very mild red glow. The healthy-sized head has a creamy appearance, but fades quickly and leaves a thin grainy appearing tan layer of foam. As the head departs it leaves solid lacing varying from thin to chunky.

The nose seems a bit dusty with a sour malty grain component. Hints of chocolate make it in, but the expected smokiness doesn't quite make it to the show. The mouthfeel is very crisp. The flavor is somewhat thin, characterized by watery roasted malts. There's also a feint caramel sweetness. Although seemingly missing from the nose, a very mild char flavor is present, but it does manage to provide some bite. Finally, the beer wraps up its presentation with a chalky and somewhat smokey finish.