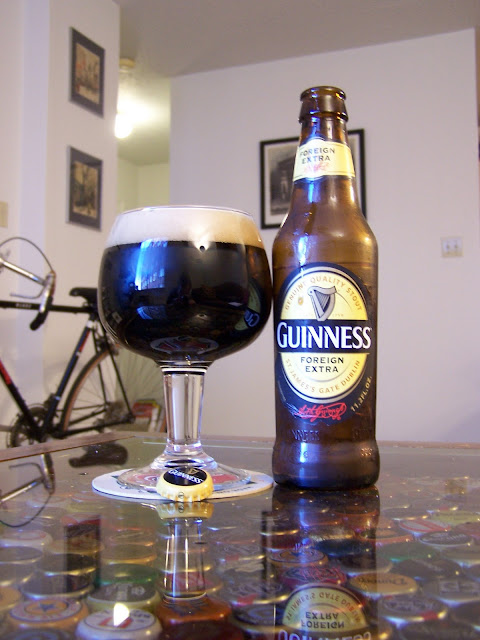 Guinness Foreign Extra
Purchased From: Harvest Fine Wines & Spirits
Serving Type: 11.2 oz. bottle, poured into a goblet
Guinness Foreign Extra is seriously different from Guinness Draught, and seriously serious. Foreign Extra was original devised in 1801 with extra hops as a preservative to facilitate shipping to the Caribbean. When prohibition stuck in the United States the beer was pulled and never returned, until now. On October 1, 2010 the beer was reintroduced to the American market. I welcome it.
This beer is dark with only a slight ruby glow at the base of the glass, held to a light. There is no seeing though this beer. The carbonation bubbles in the tan head are large, in stark contrast to the creamy head produced by nitrogenation in Guinness Draught. The head sticks around for a while and produces solid lacing.
There’s an initial sweet aroma, backed up by smokey tones. The taste follows the same pattern. Initial sweetness followed up by a dry charred bitterness and dark chocolate hints. This is no Hershey’s Special Dark, either. The chocolate component here is at once rich and bitter, more like pure cacao. Hops are much clearer here than in Draught.
Finally, there’s a lingering smoke essence. This beer has character and packs a punch. Unlike its lighter cousin, I could not knock back many of these, but that’s a good thing.
Final Verdict: A-
A Bit of History: Thanks to the wonders of nature and brewers ingenuity, the yeast used in the brewing of Guinness Foreign Extra today is actually many generations descended from the original yeast used back in 1801. At the end of each brewing cycle the yeast is extracted and can be reused.
Posted by Musings on Beer at 4:00 PM