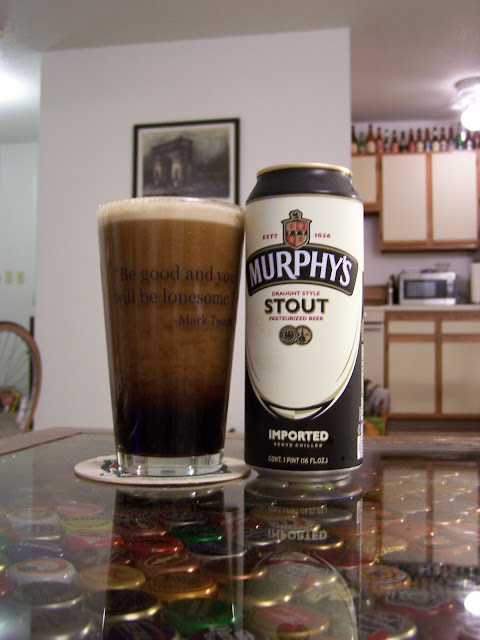 Murphy’s Irish Stout
Purchased From: Harvest Fine Wines & Spirits
Serving Type: 16 oz. nitro can, poured into a Mark Twain pint glass
Murphy’s, Guinness’ less-expensive competitor, pours very dark. It’s considerably darker than Guinness with only hints of its true ruby complexion coming through at the edges of the glass when held up to a light. Like Guinness, the cascading bubbles, slowed by contact with the edge of the glass, are a prominent and eye-catching feature of the pour. (See below for more information)
The large creamy tan head is thick and liable to leave a beer mustache on an eager drinker. There’s a depth of flavor here lacking from Guinness Draught. The bold malts are toasted dark and there’s a considerable bittering from the beer’s hops. Sweet coffee and mollasses are present, but nicely rounded. The finish carries a smokier character that adds to the layers of flavor, balanced by a light caramel sweetness on the aftertaste.
Murphy’s has a lot going for it, over Guinness. It’s cheaper, it’s bolder and more flavorful, and the cans are bigger!
Final Verdict: B+
A Note on Cascading Bubbles: Pay close attention next time you’re pouring a beer into a glass. The characteristic cascading bubbles found in Guinness and Murphy’s are actually present in all beer. It’s just that the contrast between the color of the bubbles and the body is much more pronounced in a darker beer.
The cascade is caused by drag from the wall of the glass. Bubbles naturally rise to the top of the beer, but those in contact with the glass are slowed down, and as air rushes from the center of the glass (not touching the wall) to the top, those bubbles on the sides are actually pulled downward, creating the effect.
Posted by Musings on Beer at 4:00 PM