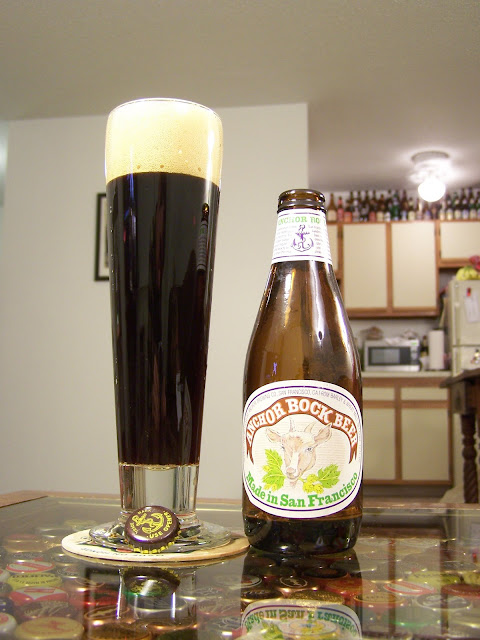 Purchased From: Harvest Fine Wines & Spirits
Serving Type: 12 oz. bottle, poured into a flute glass
Anchor's Bock comes in as the fifth Anchor Brewing Company beer in a row. I originally had four to do a short series with, but when I was stocking up for the next week of beer reviews I saw this one and thought I'd extend the series a bit. This bock pours a very dark brown with a mild chestnut glow. The beer is a lot darker than I was expecting out of a bock. The appearance features a very generous and airy brown foam head. The retention is substantial with lacing to match.
The nose matches the beer's appearance with a dark coffee-like aroma. The nose is also extremely bready. The added wheat malts come through with the likeness of an entire loaf of stone cracked whole wheat bread. No pulverized wheat or bleached white bread here. Despite the dark appearance of the beer, the underlying lagery malt is fairly light. There is, though, a considerable, but not overpowering, charred smokiness. This is balances by a subtle hop component.
Near the finish there's a earthen dryness with a slight clay-like character. The body is smooth and somewhat milky. The darkness and smokiness of the beer is a bit out of character for a bock. I would say this beer seems to have more of the qualities of a porter than a bock. Not bad, but not what I'd expect from a bock.
Final Verdict: B-
Posted by Unknown at 1:00 PM

Email ThisBlogThis!Share to TwitterShare to FacebookShare to Pinterest
Labels: B-, Bock, CA, Review