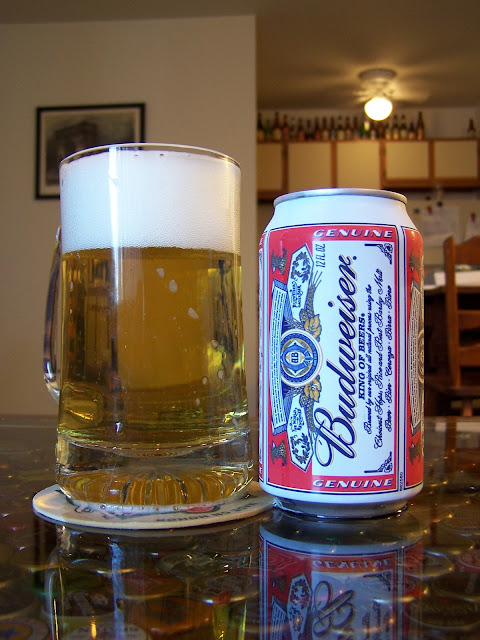 Budweiser
Purchased From: Gillette Ridge Wine & Spirits
Serving Type: 12 oz. can, poured into a mug
Budweiser is the self-proclaimed “King of Beers,” so what could possibly be better to kick off the American Lager series? Get ready for more than a week of slogans, gimmicks, and marketing angles, it’s only going to get more intense.
Budweiser pours a light to medium straw with a large white head and tons of active carbonation. The head fades pretty quick, and doesn’t leave much evidence of its presence.
The nose is almost all malts. On the tasting, the mouthfeel is slick and somewhat oily with a tinge from the carbonation and minor hops. Rice and corn abound. The almost all-malt body leaves you with a sweet finish, stemming primarily from the cereal grains.
I’m not sure there’s a current gimmick to get you to buy Budweiser, I think they save the marketing money for Bud Select and Bud Select 55. So, at least I can appreciate the classic stance taken by Anheuser-Busch i.e. InBev regarding this one. I’ve also always thought the can design was great. Lots of attention to detail and nuance. If only the beer itself had any of these characteristics.
Like I said previously, I’m planning on implementing a rating system. For now, I’m sticking with a regular grading system, but I may change it up in the future. Also, for now, I’m going to rate the beers in this series based on where I believe they stand among the competition in their style.
So, when I say that I give Budweiser a “C” “B-“, for having some drinkability, a somewhat pungent malt character (not as watery as some of its competition), and light on gimmicks, that’s in the context of only similar beers. It could maybe get aC+ B, but I’ve always regarded the top-name macros as being overpriced for what you get. Budweiser is no exception.
Final Verdict: C* - Keep in mind what I said above. B- ** Read this
Posted by Musings on Beer at 12:27 AM