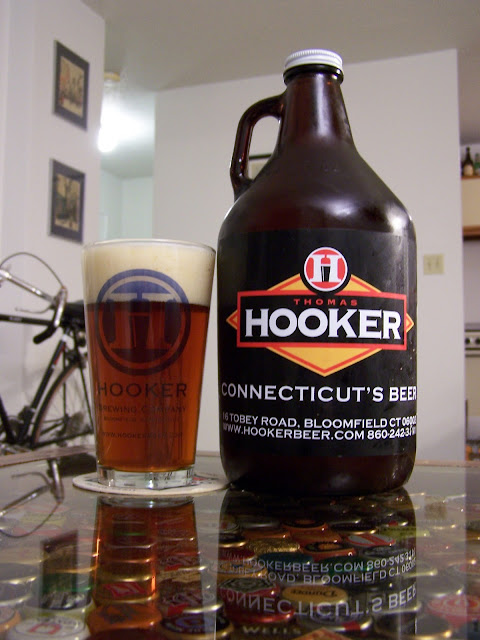 Update
Last weekend I made a trip to the Hooker Brewery in Bloomfield, CT with a few friends. While I was there I got a growler of their Octoberfest beer and sampled some directly from the brite tank. What’s this say to me? They brew Octoberfest on site. I read, previously, that the beer was contract brewed by another brewer. I mentioned this in my post about Hooker’s Octoberfest. What I read was a bit old, so I assume that it was previously contract-brewed, but now they’re doing it themselves. Could’ve happened any time in the last 4 years, actually. My mistake, glad I followed up.
I highly recommend that you check out the brewery if you live in the area (or if you visit). Every Saturday they offer tours and tasting for only $5. You get to see the facility, learn about the brewing process, and sample 4 (potentially more) of their beers. It’s a great deal and a lot of fun. You can also purchase beer by the growler to bring home with you.
News
Starting tomorrow I’m doing a beer series on the site. What’s the theme? Mass-market American Adjunct Lagers. These are the beers (if you grew up in America) that you’ve always known as ‘beer.’ These American Lagers gained the addition of the term ‘adjunct’ because the brewers (macro brewers for the most part) have substituted some other grains such as rice and corn for some of the barley malts used in the brewing process. The drafters of the Reinheitsgebot would be spinning in their graves.
Nonetheless, I’ve got a huge list of beers to review, most of them coming from Copaco Liquors in Bloomfield, Connecticut. It’s not my favorite package store (by a long shot), but they usually have a ton of broken up six packs. In fact, I only had to break up one in order to get a beer to taste. That was Coors Light. We all know, that if you’re in the market to buy a single beer, Coors Light is not going to be it. You want something with a little bit of alcohol in it, not just fizzy water.
So, stay tuned! A ton of beers coming your way. I’m also going to begin using a rating system to give a final verdict on the beers I taste. I got some feedback saying that I should give a rating a week-or-so ago, but I’ve been waiting to start this series to roll it out. That, and I haven’t decided on the system quite yet.
Posted by Musings on Beer at 8:18 PM