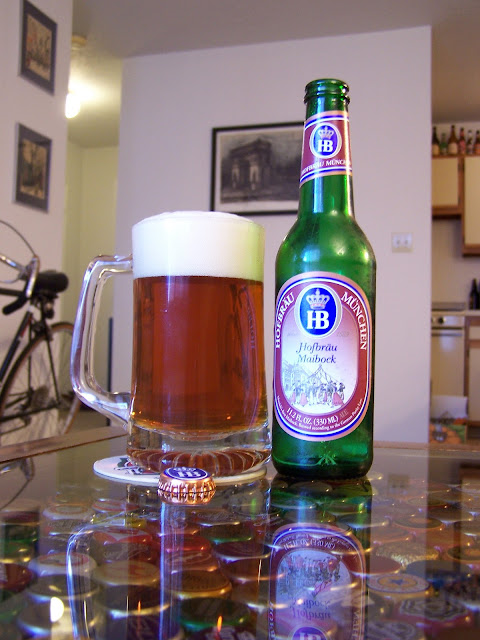 Hofbräu - Maibock
Purchased From: Beers of the World
Serving Type: 11.2 oz. green glass bottle, poured into a mug
This Maibock pours a clear, but deep, amber with an impressively creamy foam head. Not unexpectedly, the head carries a slight tan hue and produces tons of lacing in the mug. The nose of the beer is incredibly fresh with hits of green grapes and plenty of toasted malts.
The beer is full-bodied with a strong malt character. There’s a clear hop character, but it is definitely second to the toasted malts. Characteristic to the style, this Maibock has a pretty high alcohol content, 7.2%. There’s a slight heat on the finish, but not strong enough to be off-putting.
The style is typically associated with the spring, hence the name Maibock (May bock) and is a member of the bock family of beers. There’s some contention whether or not the Maibock style is the same as Hellerbock, a similar beer also brewed in the region. I am yet to try a self-proclaimed Hellerbock, but from what I’ve read they’re generally considered to be the same style.
Posted by Musings on Beer at 4:00 PM