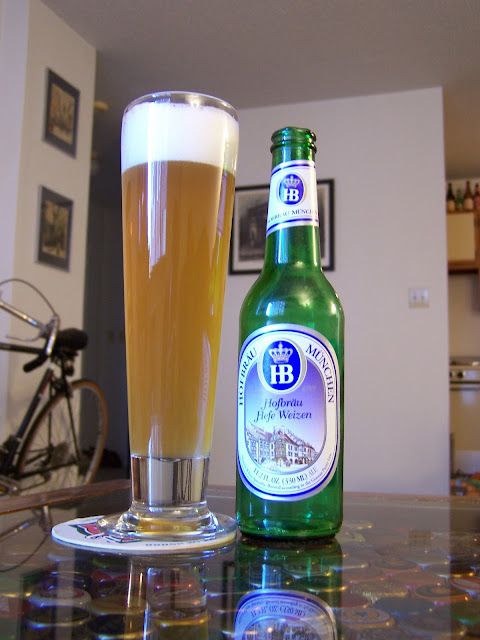 Hofbräu - Hefe Weizen
Purchased From: Beers of the World
Serving Type: 11.2 oz. green glass bottle, poured into a flute glass
Hofbräu’s wheat beer pours with a pale fresh straw color, a mild light haze, and some very faint grassy green hints. The pour produces a large fluffy white head that dissipates to a mild bubbly top lining. It leaves some considerable contoured lacing on the glass.
Typical banana and clove flavors are present on the taste and the nose. A citrusy lemon is also present, more so here than is usually found. A musty yeast appears on the finish combined with a slight dryness. The beer is very drinkable and easily enjoyable. Despite have almost no visible active carbonation the mouthfeel is full of body and depth.
Note on Reinheitsgebot: As with yesterday’s Hofbräu Original (and many other Bavarian beers) the bottle of this weisse bier proudly mentions the German Purity Law. The back of this bottle takes it a step further, exclaiming that it is “Brewed exclusively from water, wheat malt, barley malt, hops and yeast according to the famous Reinheitsgebot (Purity Law) of 1516.” As I pointed out in yesterday’sposting, the law has since been repealed and is simply a marketing tactic today.
The Reinheitsgebot reads exclusively to say that they only ingredients allowed for brewing in accordance with law are water, malted barley, and hops. You can read a translated text of it here. Yeast, an important ingredient in beer, is left out because when the law was written, yeast’s impact on the process was not yet discovered. Louis Pasteur wouldn’t figure that out for a couple hundred years. At the time, brewers relied on ‘spontaneous fermentation.’ Essentially, free floating yeast would land in brewing pots and work their magic to produce beer. So, the inclusion of yeast as an ingredient is acceptable even under the law.
What’s not acceptable, however, is the use of other grains in the brewing process. It’s quite clear, really. However, as I’ve pointed out, today’s Bavarian brewers love to tout the Purity Law on their packaging. And in this case, even on a wheat beer (which contains malted wheat), the defunct law is used as a selling point, even though the process of brewing this delicious beer does not follow the list of ingredients prescribed by the law itself.
My point here is not to say that this beer is not good, or that it’s not deserving of praise. It certainly is. However, just keep an eye out for these convenient marketing pitches. Accept them with a grain of salt.
Posted by Musings on Beer at 8:16 PM