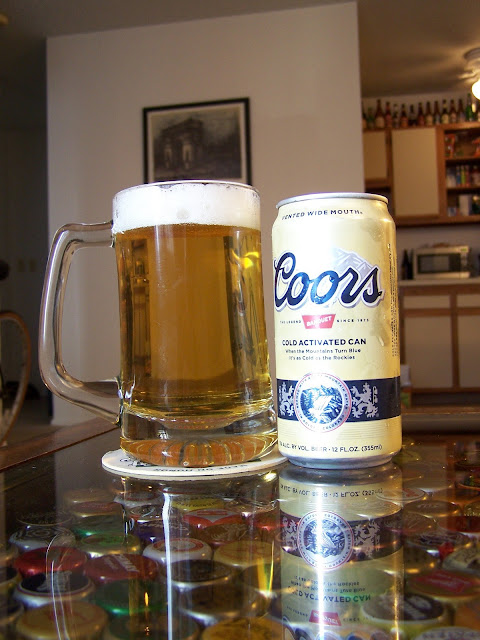 Coors
Purchased From: Copaco Liquors & Fine Wines
Serving Type: 12 oz. tall can, poured into a mug
Ah, Coors, the “Banquet Beer.” Pours a large foam head with good initial retention, but it soon disappears. Almost no trace of the head remains. The nose has vague soapy notes and a light must. Not off-putting at all.
Thin malts and a light sweetness are all that describe the beer’s flavor, backed up by tons of carbonation. The finish is crisp but a lingering sweetness pervades. No hops can be detected.
On to the gimmicks. Coors, I think, has the most. I’m not surprised, given the lack of heart to the beer. The first, the “vented wide mouth” (pictured below). Not only have all beers and soft drinks in America adopted the wide mouth opening, Coors has taken it a step further by “venting” it. How? They’ve added a slight bump next to the opening, apparently to let air flow more freely. Who knows if it actually works. Even if it does, what’s the point? Maybe it’s to help you choke this beer down faster. That way you don’t actually taste anything, you just get drunk. 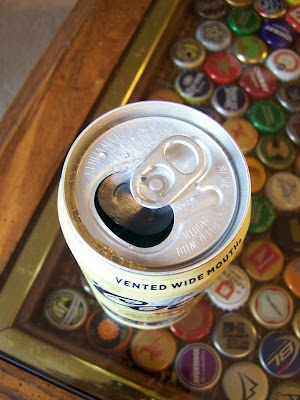 On to the second gimmick. The cold activated can. “When the Mountains Turn Blue It’s as Cold as the Rockies” (capitalization intact). Amazing and quite entertaining innovation. All it does is let you know that the beer is so cold you’ll have trouble tasting it. Upon my first taste the can was not “activated” a travesty, I’m sure. The thing was, I could actually taste the beer. What little there is to taste.
In summary, vent the mouth to let you drink it faster and serve it so cold you can’t taste it. These are the keys to marketing a beer light on flavor and character.
I don’t mind it, and Coors original is somewhat rare to find. The novelty helps it retain some points, but really, I think Coors has the least character out of any of the macros.
Final Verdict: C*
*This rating is based on my thoughts and opinions of this beer as compared to those similar to it.
Posted by Musings on Beer at 4:00 PM