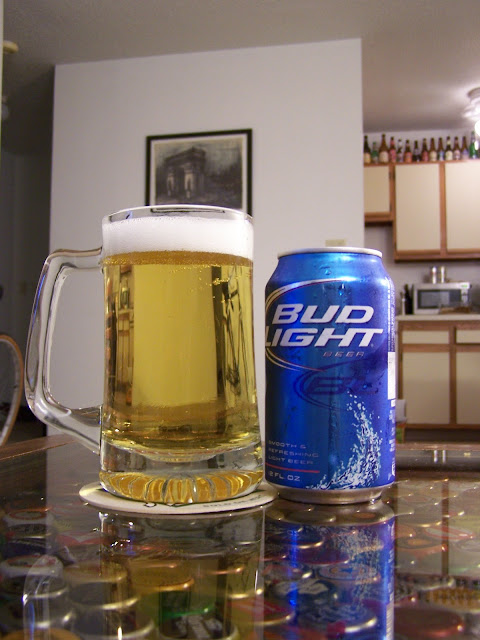 Bud Light
Purchased From: Copaco
Serving Type: 12 oz. can, poured into a mug
Bud Light pours a medium straw, darker than I was expecting for a light beer. There was also a very slight orange hint to the body of the beer. A small white head resulted from the pour but disappeared nearly without a trace after a minute or two.
The thin malts are somewhat masked by the extra water, but the high carbonation keeps the beer from seeming too watered down. The distinctive Budweiser flavor is present here, which, again, combats the watered down characteristic of a light beer. The flavor carries through till the end producing a dry finish.
Known for its “Superior Drinkability” Bud Light is one of the better Light lagers around. It carries on with some actual flavor, however minimal it might be. Light beer overall is not something I’m too interested in. Sure it may be “less filling” but if you’re looking to drink in quantity, I don’t see the point of drinking a less alcoholic beer. Unless, of course, you’re aiming for a larger pile of cans at the end of the night.
Final Verdict: C-*
*This rating is based on my thoughts and opinions of this beer as compared to those similar to it.
Posted by Musings on Beer at 12:40 AM