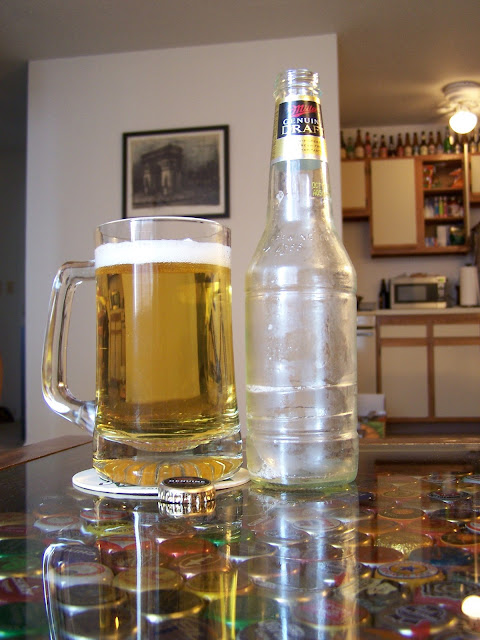 Miller Genuine Draft
Purchased From: Copaco
Serving Type: 12 oz. clear glass bottle missing its label, poured into a mug
Miller Genuine Draft, colloquially MGD, pours a deep straw, crystal clear, with a light white foam head that dissipates pretty quickly. Toward the end there’s slight retention, but nothing to write home about. Medium-high active carbonation and a tiny bit of lacing persist.
The malts, like all MGD’s bretheren, take center stage, but remain light overall. There’s also a mild amount of distinguishable hopping here. Not great, but certainly not terrible. It lacks the depth you might hope for in a beer, but what can you expect? As with Budweiser and Coors, MGD is a bit too pricey for me to ever consider keeping it around.
Not really sure what happened to the label, here, but maybe that’s for the better. Do I really need to read about the beer, describing, in breathless terms, how they’ve managed to capture that real ‘straight-from-the-tap taste’ in a clear glass bottle? Just don’t let these things get too much sun or else you’ll be dealing with the issues associated with “lightstruck” beer.
Final Verdict: C+*
*This rating is based on my thoughts and opinions of this beer as compared to those similar to it.
Posted by Musings on Beer at 12:39 AM