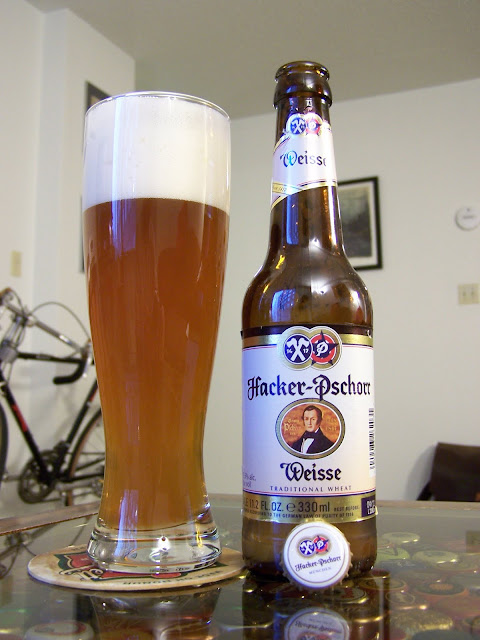 This traditional Bavarian wheat beer pours a muted orange-brown with long stringy suspensions of yeast. The massive, creamy, off-white head is stiff with massive peaks of foam. The retention of the head is excellent and leaves large, thick chunks of lacing. Spicy wheat malts on the nose are adorned with light hints of coriander and mild cinnamon. As is common, big clove notes play nicely with laid back banana phenols.

Creamy and full-bodies, the beer boasts a velvet carbonation that accentuates the big bready malt. Banana bread flavor is rich and satisfying with hints of vanilla and undertones of traditional wheat beer spices and minor cocoa notes. The finish produces a lasting and lightly fruity aftertaste. Vague cinnamon, mild all spice and hints of walnut linger.

This beer, like many Bavarian brews boasts that it is brewed under the Reinheitsgebot or "German Purity Laws." I've complained about this marketing tactic before, but I'll mention again, that according to the Reinheitsgebot, only barley could be used in the production of beer. Therefore, a wheat beer, such as this (and as good as it is) cannot possibly adhere to the long outmoded restrictions.