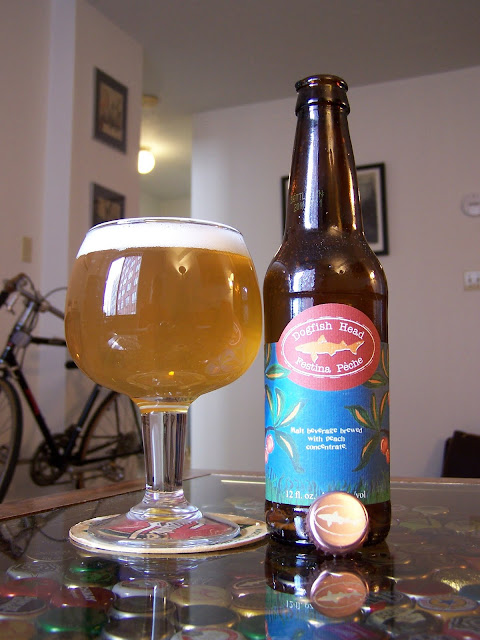 This flavored offering from Dogfish Head prominently features the brew addition of peach concentrate. If you don't want your juice from concentrate, do you want your beer that way? Festina Pêche pours a light straw with a hazy complexion and gentle rising carbonation. The moderately-sized creamy white head sticks around with modest retention and produces light lacing. There's an average maltiness to the nose. The peach aroma is initially subtle, but ultimately defines the nose. The added fruit is sweet, but not cloying or candied.

The beer's bright carbonation makes for a crisp body. Despite this, the beer's sweetness seems syrupy up front. Big peach cobbler flavor enters in early and briefly. A tart, almost grape-like mid-palate dismisses the peach and reveals a disappointingly thin malt showing. There's a lightly sugary toothfeel on the finish. The beer is sessionable and quite drinkable, but it's not substantial, nor is it anything too special.