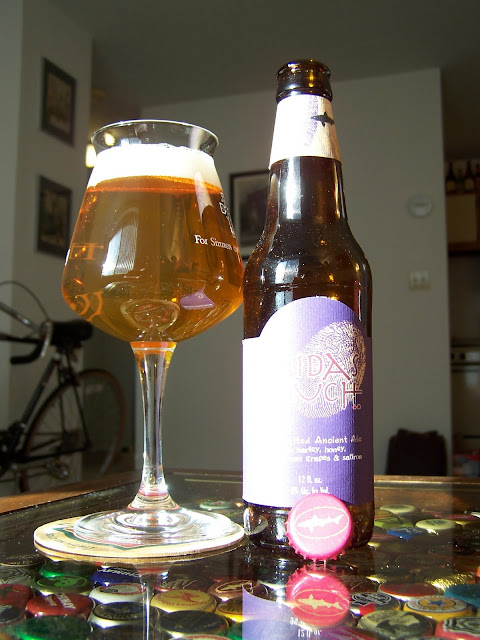 Brewed with Muscat grapes and Saffron, Midas Touch is an ambitious and interesting offering from Dogfish Head. This Golden Elixir pours a brilliant apple juice golden hue with calm, slowly rising, carbonation. Its medium-sized white head is lightly frothy with an even surface. Retention and lacing are both light. The nose is slightly musty nose. Malts seem light and are seemingly overshadowed by the sweet Muscat aroma.

The beer is clearly strong, though not alcohol forward or necessarily boozy. A clear up front fruitiness comes from the grapes, but then seems to contribute to a clear sêche wine or Port character. There's a very mild hint of saffron. The lack of abundant saffron flavor is not surprising given the spice's high price, the its sparing use accents the beer, rather than taking it over. This strong beer wraps up leaving a slick mouthfeel and a mild, but present chest heat.

Final Verdict: B
Posted by Unknown at 1:00 PM