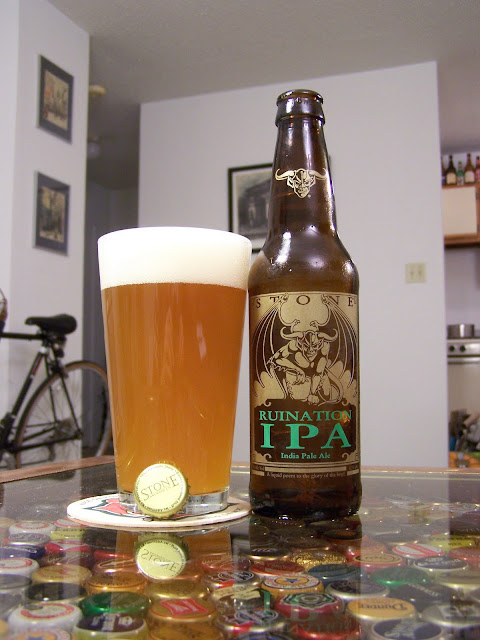 Stone Brewing Company - Ruination IPA
Purchased From: Harvest Fine Wines & Spirits
Serving Type: 12 oz. screen-printed bottle, poured into a pint glass
Ruination is another brash and confident beer from Stone Brewing Company. This one, an IPA clocking in at over 100 IBUs (International Bittering Units used to measure just how bitter a beer is) is supposed to instantly ruin the drinkers’ palate and turn every other food and drink bland.
Ruination pours a tremendous glowing orange body with a tight sticky foam head of crisp carbonation bubbles. The potent oily hop aroma is pungent to say the least. It’s got the potential to singe your nose hairs if you get too close.
The dancing carbonation is futile to cut through the hops essence. Orange and grapefruit citrus flavors make up the tingling hops that attack the taste buds.This beer is very bitter, but not overboard. It’s quite tasty and full of character, but at over 100 IBUs I thought it would be hoppier.
Am I ruined? I think not. Impressed? Yes.
Final Verdict: A
Posted by Musings on Beer at 1:00 PM