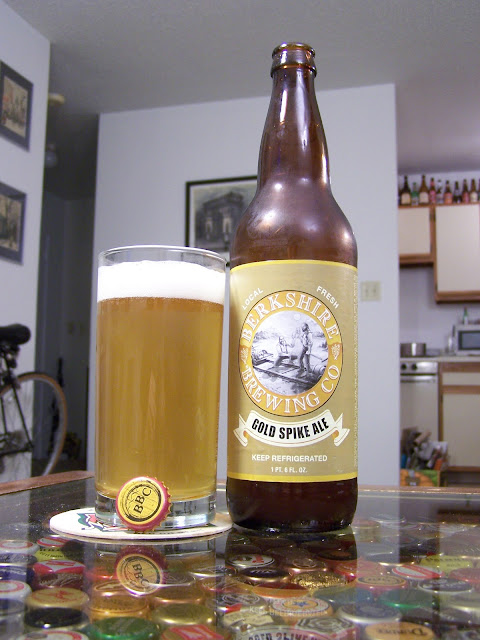 Berkshire Brewing Company - Gold Spike Ale
Purchased From: Harvest Fine Wines & Spirits
Serving Type: 650 mL ‘bomber’ bottle, poured into a Collins glass pretending to be a Stange
I accidentally bought this bottle of Gold Spike, when intending to pick up a different Berkshire Brewing Company beer. Nonetheless, I was delighted and intrigued to find out that BBC has a take on the obscure German Kölsch style. I’ve had one sip of it before, when a friend of mine ordered it, and after running into this American take, I’ll have to seek out some authentic brews as well.
Gold Spike pours a somewhat pale golden straw with an unexpectedly hazy complexion. The white head is a large light foam that floats effortlessly atop active carbonation. The lacing produced by the beer is great, and comes with an almost metallic sheen. The nose is musty and distinctively lagery with the very faint essence of Noble hops.
The malt flavor here is slick, and again, very lagery. There’s a grassy freshness with a floral mild hop profile. The hops seem to add their perfume, but not their bitterness. To round it all off there’s a pleasant honey sweetness that leads into a mild dandelion aftertaste. Overall this beer is very drinkable and enjoyable, but fairly filling.
Final Verdict: B
Posted by Musings on Beer at 1:00 PM