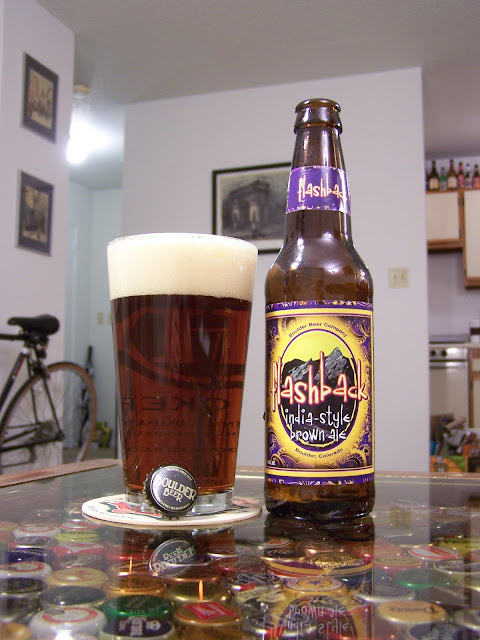 Boulder Beer Company - Flashback India-style Brown Ale
Purchased From: Harvest Fine Wines & Spirits
Serving Type: 12 oz. bottle, poured into a pint glass
Dubbed an India-style Brown Ale, this beer is somewhere in between a dark IPA and a Cascadian Dark Ale. Either way, the hops are prominent. The beer pours a crystal clear almost coppery, amber-brown. The thick craterous head of light foam begins lacing immediate and and is endowed with great staying power. The nose is hoppy, but not overly. Clearly bringing in the ‘India-style.’ Also on the nose are sweet hints of caramel and a sugary rum-like component.
Up front the toasted malts define the beer. They work with a mildly woody flavor, a bit like oak-aged beer or wine. There’s light biscuit flavor in the middle, but the hops come in a bit late to drown them out. Boulder Beer Company adds hops in five stages during the brewing process, but they seem a bit late to the game in this beer.
Final Verdict: B-
Posted by Musings on Beer at 1:00 PM