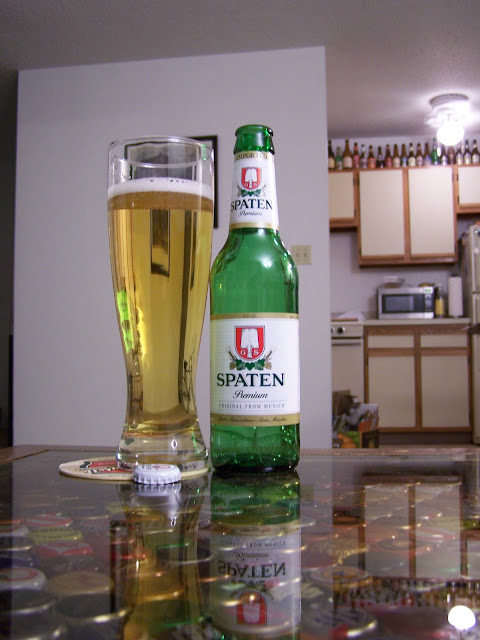 Spaten - Premium (Münchner Hell)
Purchased From: Harvest Fine Wines & Spirits
Serving Type: 12 oz. green glass bottle, poured into a pilsner glass
Spaten is a well-known German lager beer (although not to the extent of Beck’s), for which I have a pretty big soft-spot. It’s a traditional example of a Munich Helles Lager, like Hofbräu and Paulaner, which I reviewed about a month ago.
Spaten Münchner Hell pours a crystal clear golden straw body with plenty of active carbonation. There’s a thin white head on the beer, which disappears pretty quickly and doesn’t produce much in the way of lacing. The nose contains lots of pungent malts (I could smell it while pouring), and a mild apple juice aroma.
The malts are bold and make up most of the flavor. The carbonation is significant, crisp and almost biting. There’s a slight bitter tinge to the beer, coming from some mild hops. They’re noticeable on the nose, but not much in the flavor. The finish is crisp, but carries a lingering sweetness.
Final Verdict: B-
Posted by Musings on Beer at 4:00 PM