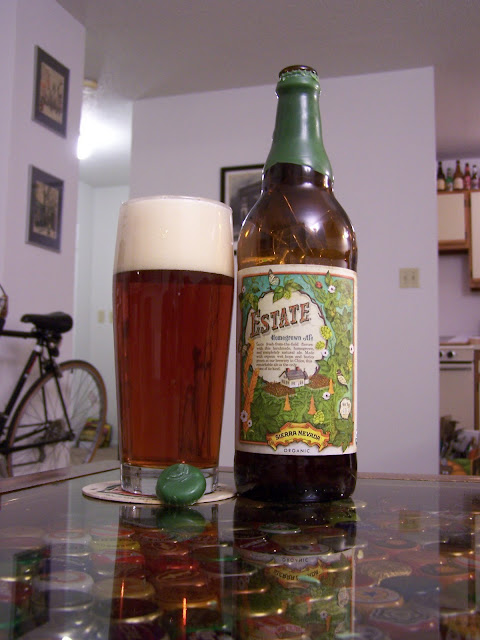 Sierra Nevada - Estate Homegrown Ale
Purchased From: Harvest Fine Wines & Spirits
Serving Type: 750 mL wax-sealed bottle, poured into a Becker pint glass
This is a special, limited-production ale produced from organic ingredients grown and brewed on site at the brewery in California. Beer Advocate bills this as an ‘American IPA,’ but its character and the official website, don’t seem to suggest that. My first reaction was that the Estate Ale was a competent, but not outstanding, IPA. However, reevaluating my opinion on this beer as a Pale Ale gives it a lot more credit.
The body is a glowing amber with a large yellowy-golden head. The foam is thick, has tremendous staying power, and produces plenty of intricate lacing on the glass. The nose is incredibly bright with floral hops and citrus.
The taste matches with extremely bright and fresh lightly toasted malts. They’re crisp and refreshing with a healthy amount of hops to back them up. The hops are also incredibly fresh-tasting and produce a highly enjoyable grapefruit aroma and flavor.
When I bought this beer I was told by the package store’s proprietor that he found it extremely fresh, but would almost like to give it some time in the bottle. Unlike the S’muttonator, which I thought could use probably about 2 years, I think fresh is the way to drink this beer. I’m not sure I’d call this a world-class American Pale Ale, but I would say drinking a beer with such character and distinctive freshness is rarity that deserves to be enjoyed.
Final Verdict: A-
Posted by Musings on Beer at 4:00 PM