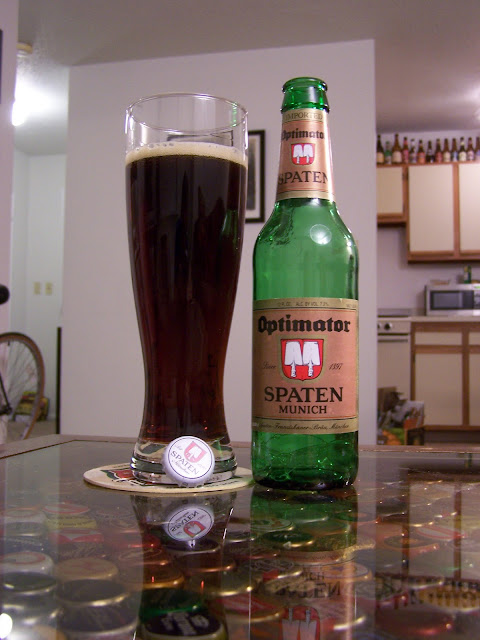 Spaten - Optimator
Purchased From: Harvest Fine Wines & Spirits
Serving Type: 12 oz. green glass bottle, poured into a pilsner glass
Optimator is a doppelbock from Spaten, which, like many other doppelbocks, makes use of the “-ator” suffix (remember Celebrator and S’muttonator). The addition of the suffix is quite common among the style, and comes from the name of the original doppelbock ‘Salvator’ from Paulaner brewery. Aside from this, Optimator is my 50th beer review! Nearly daily for about 2 months.
Optimator is dark brown, filtered clear, but has a somewhat dull complexion. It pours with a thin light-colored head, which fades fast. It leaves some foam around the edges of the glass, but no lacing to speak of. Malts similar to the Spaten Premium are detectable on the nose as well as some light hopping. There’s also a mild toasted malt sweetness and some dark fruit aroma.
The mouthfeel is syrupy and almost sticky. The characteristic Spaten malts clearly underly the toasted malts that give the beer its color and tasty chocolate hints. There’s also a solid hop bittering to the beer. Unfortunately, the overall flavor of the beer seems to fade pretty quickly. A slight lingering smoke sticks around for a respectable time.
Final Verdict: B+
Edit: I forgot to point out the somewhat-humorous play on Spaten’s logo on Optimator’s label. If you check out the other two Spaten brews, (the past two days) you’ll notice their logo is a single shovel. In honor of this double bock, they’ve modified their logo to sport a double shovel.
Posted by Musings on Beer at 4:00 PM