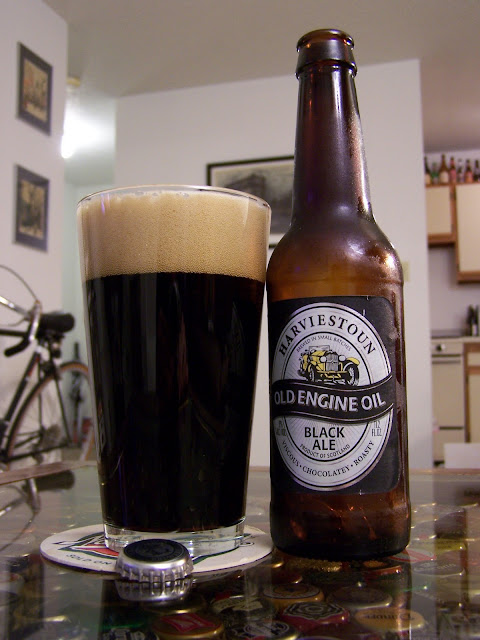 Harviestoun - Old Engine Oil
Purchased From: Beers of the World
Serving Type: 11.2 oz. bottle, poured into a pint glass
Purchased for the novelty of the name, Old Engine Oil takes its title from the thick, black color of the beer, similar to the appearance of, you guessed it, old engine oil. Looking beyond the novel name, this self-proclaimed “Black Ale” is one serious English Porter-style ale, brewed in Scotland.
The porter pours a nearly-black body with extremely consistent color. It also produces a relatively thick, creamy, tan head with large carbonation bubbles throughout. The head dissipates very slowly, leaving great lacing on the glass.
Old Engine Oil’s nose and taste are both dominated by the powerful smokiness of the toasted malts that give the ale its color. While having a very thick appearance, it has an even mouthfeel, which strikes a balance between its light carbonation and the creaminess typical of this style. The malts are characterized by chocolate and coffee notes, as well as the sweetness of caramel. The end result is a beer that isn’t too heavy to enjoy and winds up being incredibly drinkable.
I would be very interested in trying this beer again, especially if it were available either on nitro-tap, or if they sold it in 500mL nitro-cans.
Posted by Musings on Beer at 4:00 PM