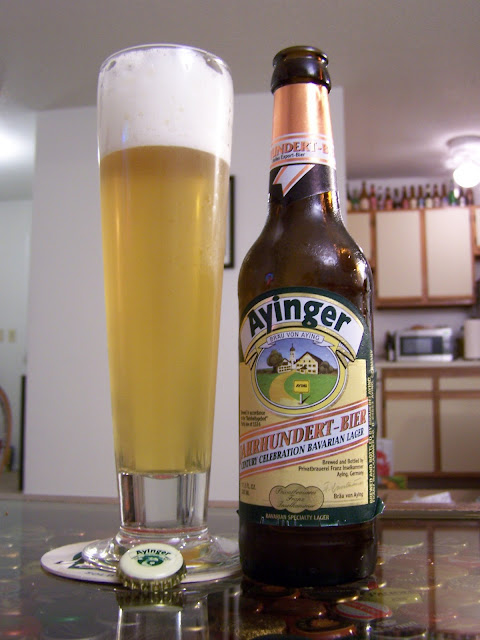 Ayinger - Jahrhundert-Bier
Purchased From: Harvest Fine Wines & Spirits
Serving Type: 11.2 oz. bottle, poured into a flute glass
Ayinger is a privately-owned brewery in Aying, Germany, a well-known and prolific Bavarian brewer. Ayinger, as a brewery, traces its routes back to 1878, and the Jahrhundert-Bier was originally brewed in 1978 to celebrate the brewery’s centennial. You may remember that I recently reviewed Ayinger’s Celebrator doppelbock. I concluded that it was a world-class example of the style. It was no mistake to think that Ayinger is capable of producing excellent beer.
Jahrhundert-Bier is an example of a German Dortmunder beer (recall my recent review of the Russian-brewed Baltika #7 Export Lager), a so-called Export Lager in the traditional German Helles style.
It pours a slightly-hazy medium straw with a light, yet tall, foamy head. The foam dissipates slowly and produces fair lacing. The nose, coming primarily from the head of the beer, has a bitter hop character and notes that remind me of green grapes. The hop profile of the beer is similar (as can be expected) to a Pilsner, so you can expect Saaz and potentially Perle hop bittering.
The body holds a light floating carbonation and prevalent sweet malts. The green grapes on the nose are present in the taste, complimented by honey and something like a sparkling apple cider. The hops are a bit muted on the taste, but keep the beer’s strong malt character from overtaking the palate. A clear and crisp finish makes this beer incredibly drinkable. This is definitely another reason to seek out products from Ayinger.
Note of comparison: If you have the opportunity to try this and compare it to what Baltika ships out and declares to be the same style, you’ll invariably notice the disparity in taste, quality, and enjoyment.
Posted by Musings on Beer at 4:00 PM