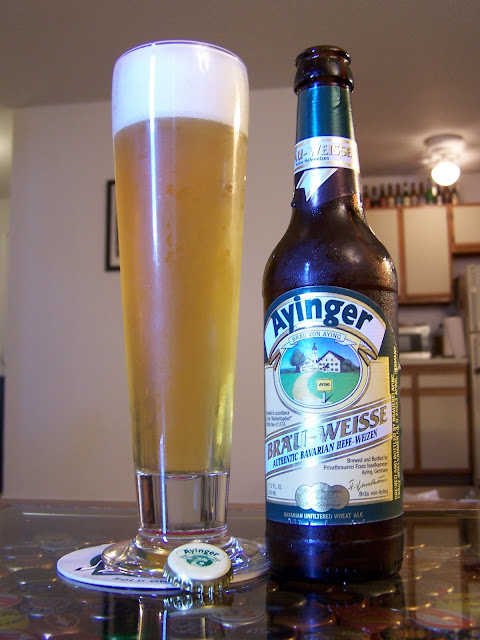 Ayinger - Bräu-Weisse
Purchased From: Harvest Fine Wines & Spirits
Serving Type: 11.2 oz. bottle, poured into a flute glass, a Weizen glass would’ve been optimal, but I haven’t come across one that’s not meant for a .5L beer.
The Ayinger Bräu-Weisse is a traditional German hefeweizen (wheat beer) brewed in Bavaria, the heart of German brewing tradition. It pours a medium straw body with a light haze and cloudy appearance. The nose features prominent banana notes with hints of clove.
The generally thin mouthfeel is balance by a light carbonation and complimented by the beer’s crisp malt character. The wheat lends a clean sweetness, which works perfectly with the clove and spice character of the beer. There is a very light hopping, which adds a depth of flavor, but clearly takes a back seat to the wheat profile.
Posted by Musings on Beer at 4:00 PM