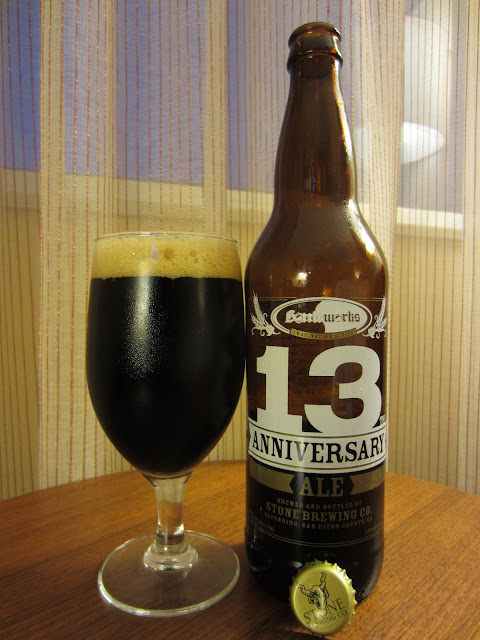 Bottleworks, a well-known Seattle-based beer seller, turned to Stone Brewing Company this year to create a beer to commemorate their 13th year in business. The beer was release today, June 20, 2012. Apparently Bottleworks has been creating anniversary ales with a number of collaborators over the years, but, this year they decided to work with craft-brewing titan Stone. Everything about this ale is 13-centric, but, despite their intentions, the ABV only came out to about 11% (the word is that too much specialty malt held back the fermentable sugar).

This beer, billed as an American Strong Ale, plays out much like an Imperial Porter or and Imperial Stout. The body is deep, almost completely opaque in a wide glass, with a mahogany brown body with auburn and ruby inner glow. Only the base of the glass reveals the beer's true hue when held to light. Gently rising streams of minuscule carbonation bubbles fuel a large, fluffy, and creamy head of dense light brown foam. The head retention is fantastic and it leaves a thick ring of lace around the top of the glass and dissipates with elegant patterns as the beer disappears.

The nose is big and sweet with an impressive malt showing. Caramelized specialty grains bring a variety of profiles, most noticeably a molasses sweetness with deep coffee notes. A hoppy edge tightens this beer and its impressive grain bill. Hops pinch at the nose slightly with a mildly resinous pine and sweet sappy cones of fresh hop essence.

The beer is crisp up front and quickly yields to a huge roasty character. Blackened, coffee-like grains produce a smokey essence that is perhaps the most prominent characteristic of this strongly dark ale, which sports most of the trappings of an export stout. The most darkly roasted malts easily overpower the lighter nuances of the White Wheat grain and Pale Two-Row malts. However, the scattering of rye malt here lends a spicy edge the coffee-like tones and the oats in this beer lend their distinctive smooth slickness, despite the opening and finishing crispness.

Smooth smokiness on the finish beckons another sip along with the dry hoppy finish. Light mineral water characteristics play in at the end and lead effortlessly to the long-lasting dank hoppiness of the aftertaste.

This beer is excellent, highly drinkable, and very, very good, but the 13 by 13 grain and hop bill seems stuntish when taken in context of the impressive and overbearing stout profile of this beer. To miss the spicy nuances of the beer, the resinous, floral, and earthy hop profiles would be remiss, but, the overpowering roasted coffee profile is the true identity of the beer.

If it's still around, find it, but if you miss it, don't feel slighted if you can pick up the absolutely-world-class Imperial Russian Stout by Stone.

Final Verdict: A
Posted by Unknown at 9:55 PM