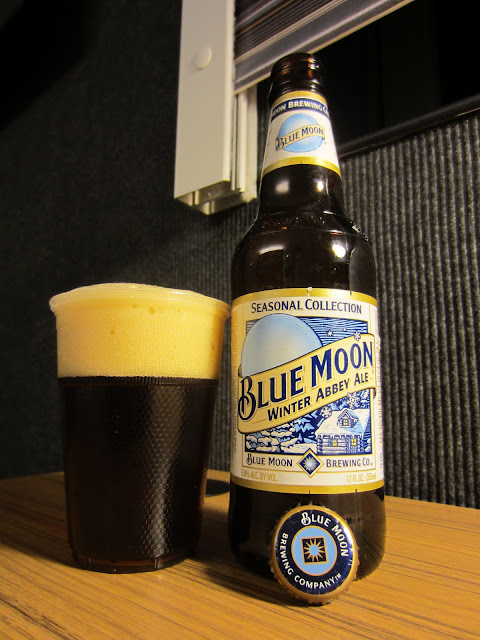 Among a number of seasonals from Blue Moon Brewing Company (ahem) Coors comes the Blue Moon Winter Abbey Ale. The beer, fashioned after a Beligan dubbel, pours a crystal-clear, medium-brown body with a ruby glow. The head is a large creamy yellowed tan with solid retention. It leaves layers of lace at the top of the glass (err, plastic cup). A big malty nose features minor grassiness on the back end. Mild toasted caramel notes are slightly soured by graininess. Overall it seems fairly dry with a slight sweet kick.

Carbonation is big and crisp up front, but yields to a light wateriness. The beer seems more like a brown ale than a Belgian dubbel or abbey ale. There's a light earthiness with mild wood notes and a faded hint of chocolate. Malts take the center stage, but remain underwhelming. They're thin with a lagery base malt undertone. The finish is mildly medicinal with a dry sweetness.

* - While I think this is a better beer, I gave a C to the regular Blue Moon Belgian White as well. I think that this Winter Seasonal is a bit better as beers go, but not quite enough to earn it a C+. It is a far cry from a Belgian Dubbel, but it is functional as a brown ale, and not what I'd call bad at that.
Posted by Unknown at 1:00 PM