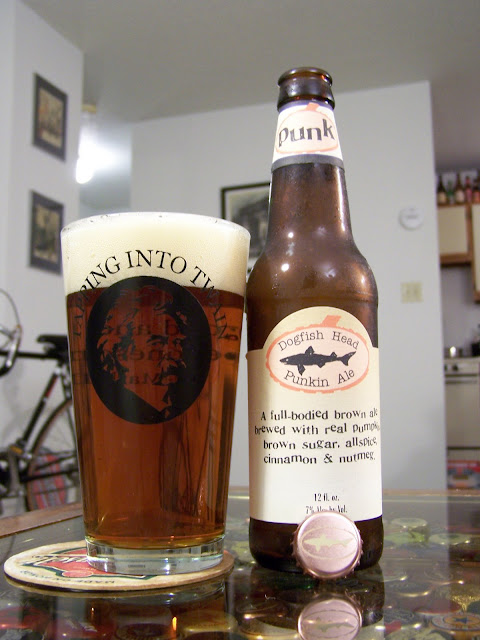 Dogfish's Punkin Ale pours a radiating copper body with a large creamy light tan head. The foam retention is solid and leaves mild lacing behind as the head slowly retreats. Sweet pumpkin from puree meets mounds of spices on the nose. The bottle cheerfully advertises extras added to the brew process including brown sugar, which adds nuanced sweetness, as well as allspice, cinnamon, and nutmeg. Allspice and nutmeg are most prominent and give the beer a pumpkin pie aroma.

What gives Punkin Ale a solid footing is that it starts with a highly competent brown ale. A malt forward profile is buttressed by heaps of spice. Brown sugar and the toasted malts of the underlying brown ale give the beer defined caramel and molasses flavors. Pumpkin is delicious and spicy in and of itself with plentiful earthy and vegetal tones. Spices add pumpkin pie influence, but don't define the brew or pigeon hole it as a pie in a glass. The finish has some heat and a lasting spiciness. One of my favorites of the season.