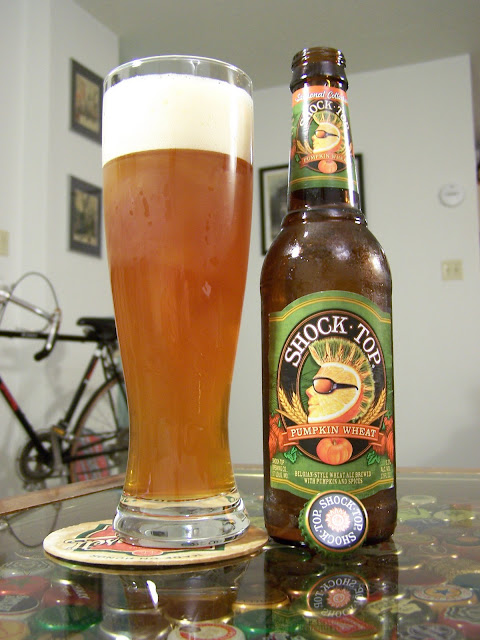 Pumpkin Wheat from the supposed "Shock Top Brewing Company" is brewed by Anheuser-Busch, owned by InBev, and is one of the companies many (many) brands of beer. Originally under AB's Michelob lineup, the brand has been a fairly successful competitor to Coors' Blue Moon in the macro-posing-as-micro market segment.

The beer pours an attractive hazy orange body with long wisps of floating sediment. The large, yellowed off-white head is fairly creamy and boasts solid retention. The nose is dry with a minor astringency. Mild pumpkin is present, but the emphasis is on spiciness with nutmeg and cinnamon as the standouts. The nose finishes on a semi-medicinal note.

Matched to a velveteen carbonation the silkiness of the wheat malts pairs with pumpkin flavor for an interesting combination. The bottle claims real pumpkin, but it's unclear what exactly that means and I'm skeptical if that means that real pumpkin chunks pass within a mile of the brew process. Dry spices round out the beer. Clove, cinnamon, and nutmeg give the beer a traditional pumpkin pie edge. The finish has a tinge of citrus and makes for a strange pairing with the nutmeg. The aftertaste is astringent and slightly medicinal, but the beer is surprising okay overall.