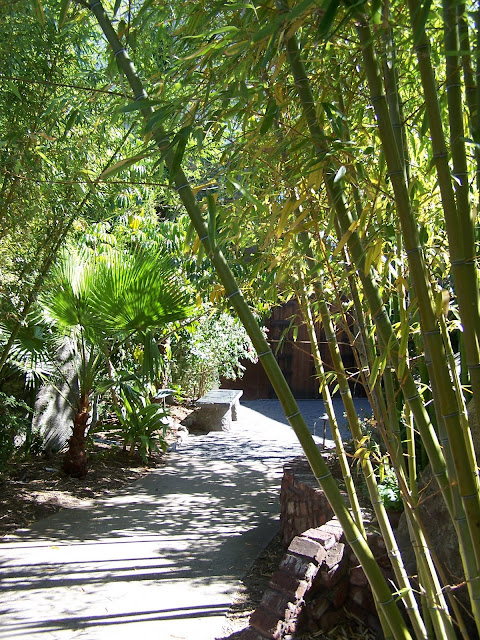 Also on my way down to San Deigo, I stopped in for a tour at Stone Brewing Company. I stopped here first, only to find out that the next tour was booked and that I had two hours to kill. I spent that time enjoying life at The Lost Abbey. Walking down the path from the parking lot reveals a vibrant path lined by plenty of foliage and benches. 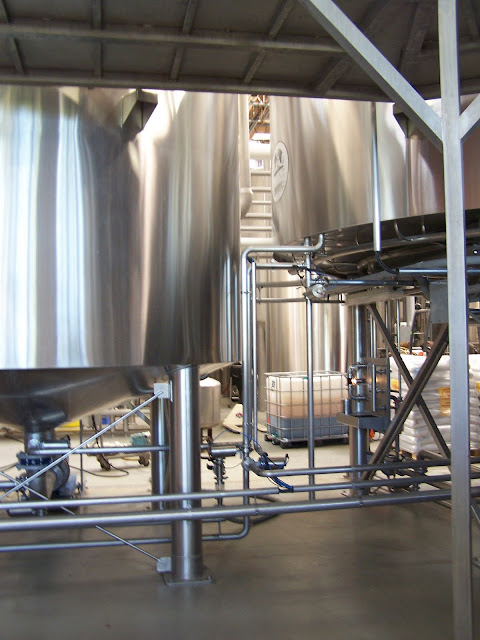 The facility was quite large, but unfortunately, I didn't take notes. I believe that Stone moved to this current location in the mid-00's, but I can't be sure. With a number of brew tanks and mash tuns, the output ability of Stone is impressive, for a craft brew operation. 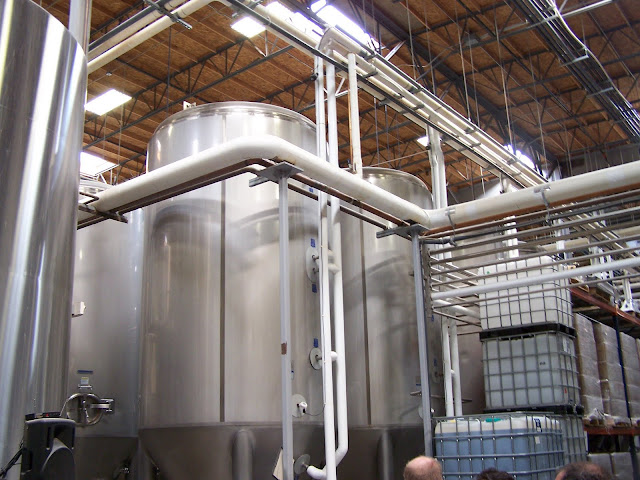 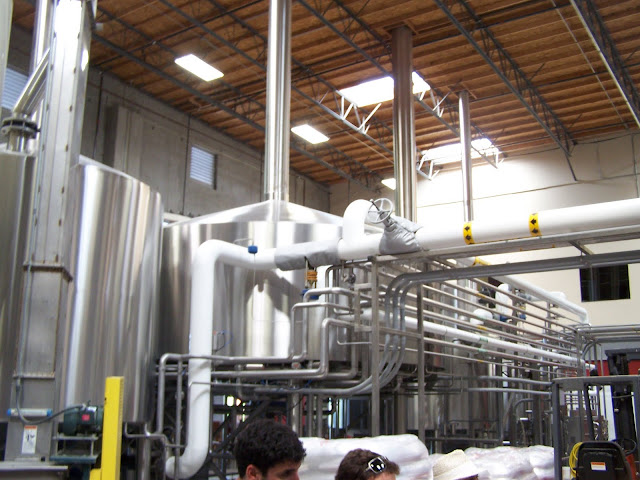 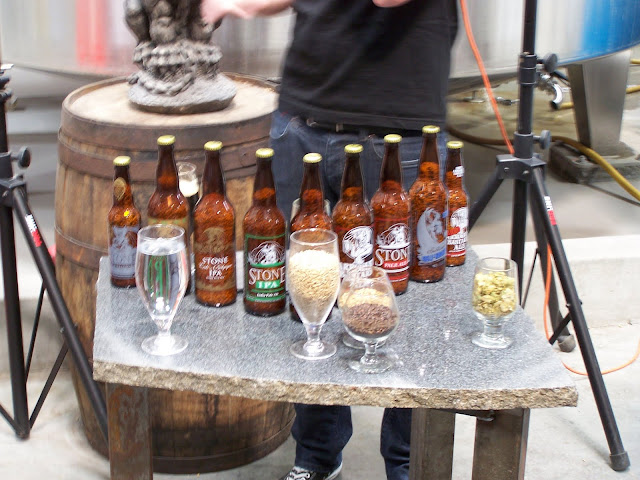 The tour guide hit all of the brewing basics, explaining the process and the ingredients. In each of the bottles are a selection of the malts used to produce the individual beer. The guide also passed around glasses containing the brewery's base malts, a toasted caramel malt, another specialty malt and a selection of whole hop flowers. He revealed, though, that Stone uses, almost exclusively, hop pellets, rather than whole cones. 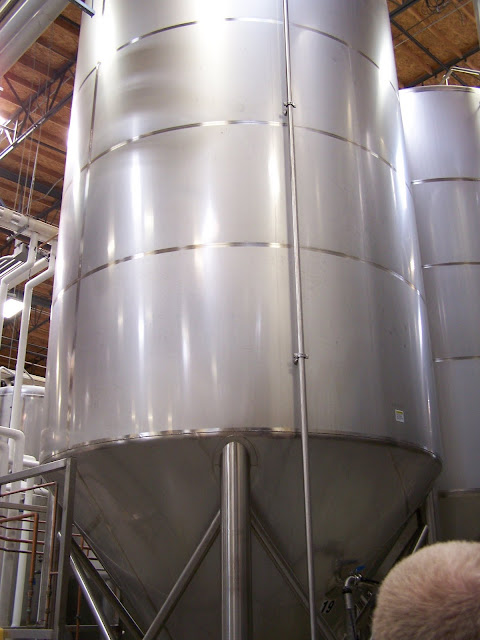 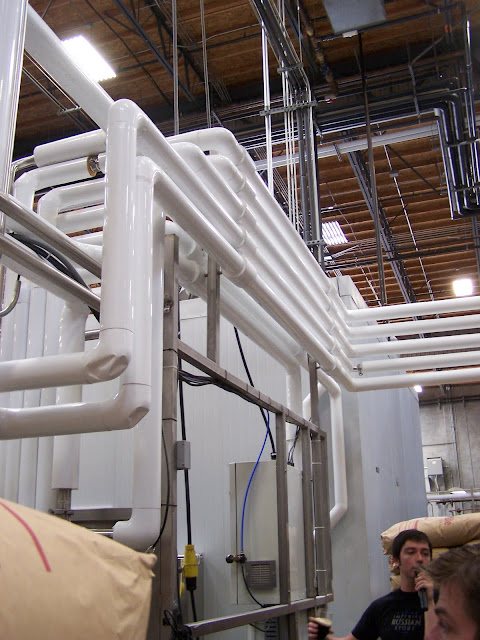 The dented pipes here still do their job, but we found out that there was a forklift incident some time ago. 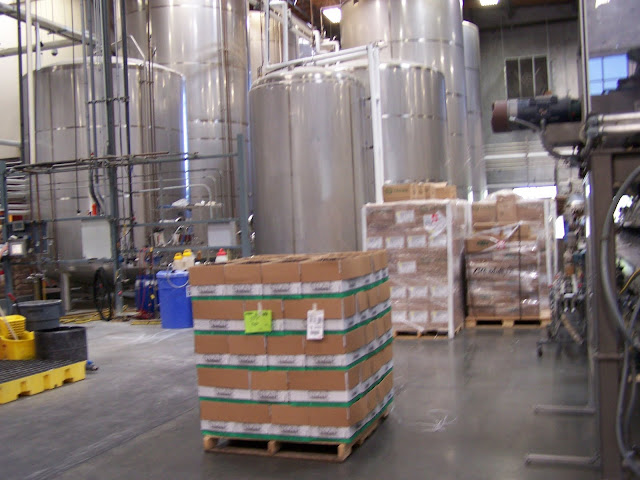 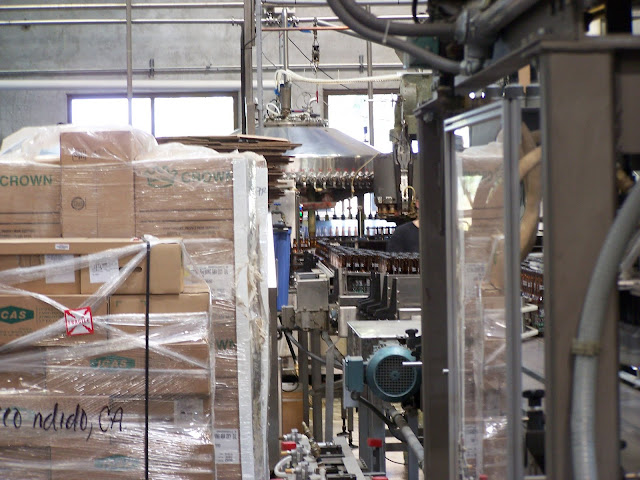 A look at the bottling line. Unfortunately, some of my other photos of it came out a bit too blurry for posting. We couldn't get too close because eye and ear protection are required. 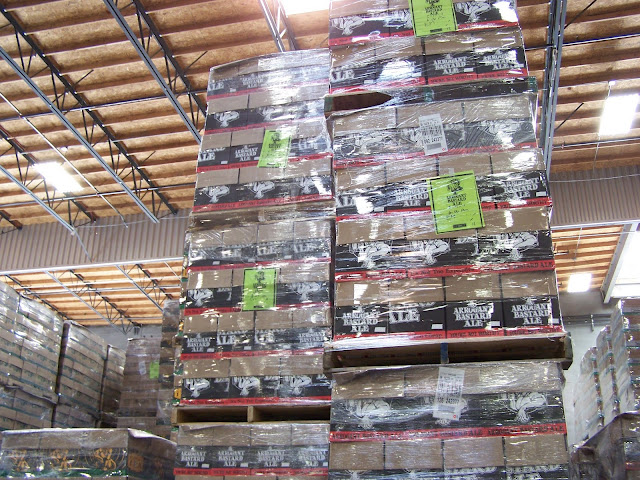 A tower of cases ready for packaging.

After the tour we spent some time in the tap room/gift shop where we sampled four Stone brews. I can't remember which exactly they were, but there was at least one optional beer to rotate in. Most of the beers were standard fare. Stone's IPA, Levitation Pale Ale, Arrogant Bastard, and one more.

Also for sale were growlers and individual bottles. I bought a handful of bottles for the road. They hung in there for quite a long time (in a cooler, refreshed with ice at least daily). I enjoyed one in Arizona, and three in Texas. I didn't take many notes on them, and missed a photo of the ordinary Russian Imperial Stout. 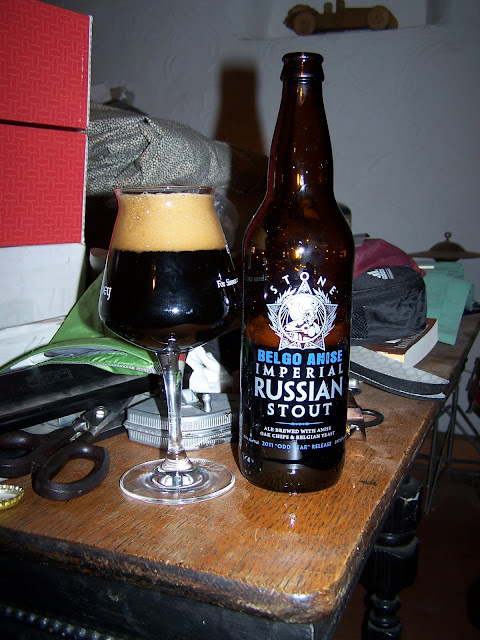 This is the Stone Imperial Russian Stout, tricked out. The addition of Belgian yeast gives the beer an extra cellary component and a distinctive spiciness on the nose. The addition of anise is impressively strong. The licorice flavor elements of anise play nicely with the silky roasted malts of the Imperial Stout. The licorice nearly overwhelms the beer, but gives an interesting new perspective on a classic style. 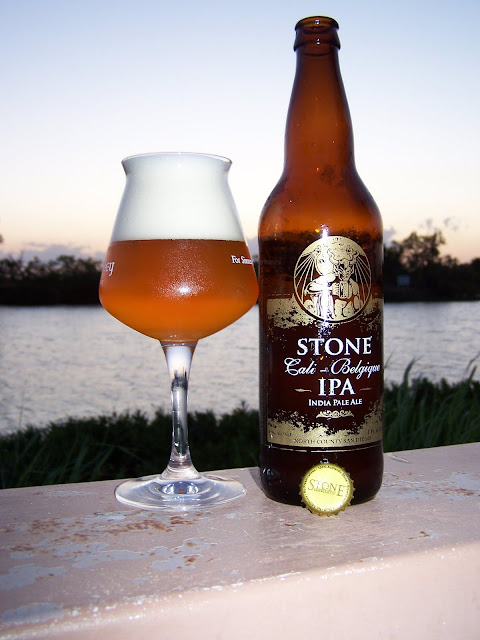 Cali-Belgique is a Belgian-style IPA brewed in the West Coast tradition. The beer pours with a massive fluffy white head with excellent retention and layered elegant lacing. The golden glowing straw body has a mix of orange and red hues throughout. The nose is a classic Belgian yeastiness. It is spicy with big coriander and citrus notes. While there's a big orange component, the hops do not dominate the nose. The yeast is center stage.

The body of the flavor comes from coarsely cracked grainy malts with a honey-like (but not waxy) sweetness. The West Coast-style hopping is big and very dry, but not in the least overbearing. The mouthfeel is velvety and succumbs to a definitive spiciness on the finish that give the beer a slightly musty Belgian edge that plays well with the dry hoppiness. 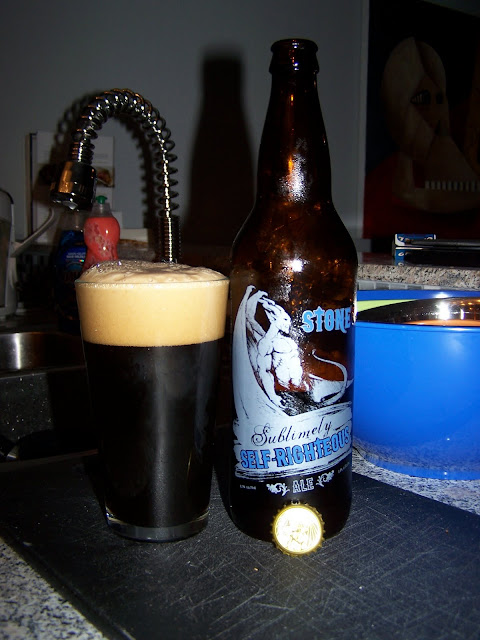 This American Black Ale pours a very dark mahogany with red and brown glows. A massive frothy creamy head in a flat tan tops the beer with great retention and lacing. The nose is grassy with a lightly sour edge and a slightly tart freshness. Big piney hops give the beer a slightly skunky 'pot-like' aroma. The beer is smokey, produced by the well-roasted malts, but is balanced nicely by an array of floral hops. The balancing act seems delicate, but is pulled off quite well.