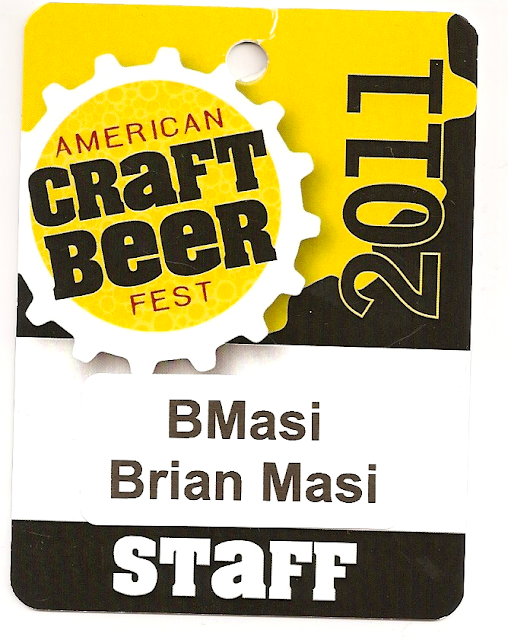 On Saturday June 4, 2011 I attended the American Crraft Brew Fest in Boston, Massachusetts. The festival was held at the Seaport World Trade Center with over 100 brewers, hundreds of beers to sample, and thousands of attendees over three sessions and two days. I was there as a volunteer for one session. As a monitor I was able to get a look at most of the booths and try a bunch of beers during my breaks. It was a lot of fun and something I plan ondoingagain in the future. I wasn't able to take as many notes as I was hoping to and didn't get any photos. I hope that next year I will be able to get some better coverage.

Below is a listing of most of the beers that I was able to try with some of my short tasting notes.

Watch City Brewing Company - Oink Oink Bacon Beer - Deep brown body, but clear. Prominent bacon on the nose, smokey with a lightly sweet malty aroma underneath. The beer is highly smokey, but the flavor is medicinal and artificial. Mixed reactions from most tasters, but I had to toss the rest of mine.

Dale's Ale - Scotch - A very slight nose, with a malty sweetness and light caramel. Beer is lightly winey and smooth with a light mouthfeel and seemingly minimal carbonation.

Maine Brewing Company - Zoe - Hoppy, lightly smokey and earthy on the nose. A very crisp drying bitter hops component. The mouthfeel is slick with an oily hop resin on the finish.

Watch City Brewery - Toasted Ah Ah Pale Ale - Tawny brown with huge banana phenols on the nose paired with lightly toasty malts. The beer is sweet and big on the malts. The banana holds true and gives the beer a smooth mouthfeel.

Surley Brewing Company - IPA - Light clear straw with moderate hops on the nose. Malts are clear and very fruity. The beer has a spicy Belgian profile. It is light on the hops, but very tasty. Slightly watery mouthfeel near the finish.

Jackie's Pub and Brewery - Hocking Triple - Darkish hazy straw with a sweet boozy nose. The beer is boozy and leafy with a slight spiciness and a mild tea-like component.

* - My notes didn't always include the full names of the breweries or beers, so some of the names may be incomplete or inaccurate. If I can, I will update this post with corrected names. This post is coming while I'm on the road, so double checking names and posting is more complicated.