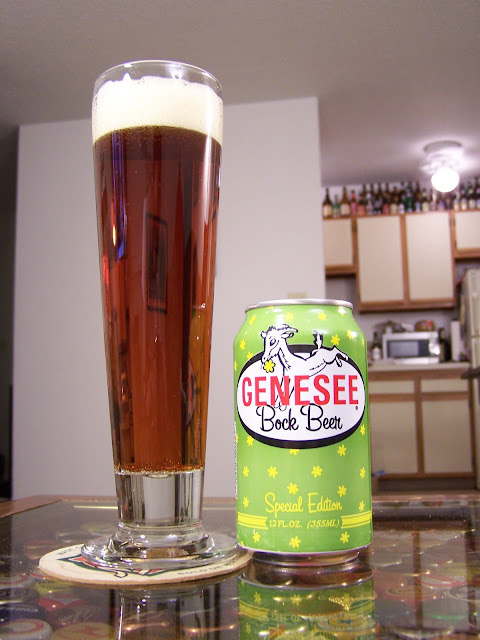 On the same day I bought a six-pack of 'Gansett Bock, I couldn't resist the ultra-value Bock from Genesee in it's awesome eye-catching packaging. Maibock season has clearly arrived. I welcome it with a glass raised high. The color here is much deeper, Genesee Bock pours a medium brown with a mild amber glow. The foam head is large and airy, colored in light tan. The retention is moderate as the head rests above a beer with huge active carbonation, continuously rushing upwards.

The nose is musty and lagery with a hint of caramel sweetness. This beer is super crisp right up front, but it detracts from the flavor a bit. The toasty malt flavor is clearly there, but it comes across a bit thin. Unlike truly good beers, a bit of warmth doesn't help the beer in developing its flavor. Luckily, a bit of warmth doesn't ruin it either. The aftertaste is a bit minerally. It's feint, but lingering.

* - Like the Bock from Narragansett this beer provides excellent value. In fact, this came in at only $8 for a 12-pack. That's tough to beat. This one almost makes the bump, but I don't think it's really good enough to be pushed over the edge to a B- just because it's cheap. Still worth checking out, solid for the price.
Posted by Unknown at 1:00 PM