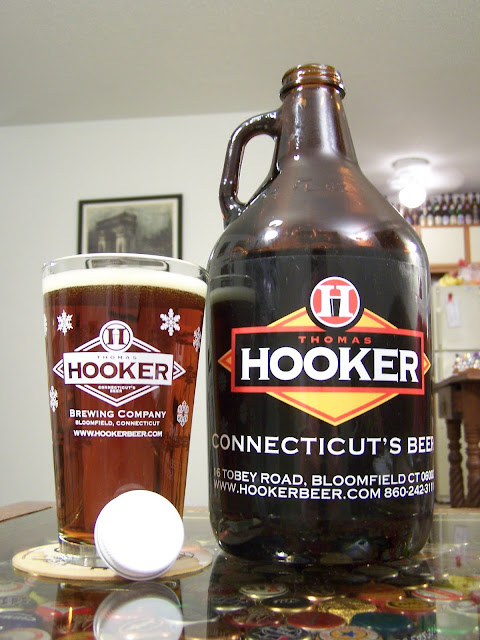 One of my seasonal favorite's from Hooker, I literally put off buying it in bottles until I could make it to the brewery to get a growler fresh from the tap. While the experience was plenty satisfying, I'm not sure this is a beer that really stands up to a few days in a growler. The pour was lighter than I expected, but I think I'm used to seeing it in the foggy plastic sample cups from the brewery. The color is a copper-ish brown with a quite modest* head made of a thin white foam, which manages only fair retention. The nose immediately hits with big malts (they pack seven into this brew (including a bit of wheat) and a mild spiciness. The hopping is extremely light, but among the caramel sweetness of the malts are cinnamon and a bit of nutmeg.

This beer is sweet, but its pleasant with a moderate body and a slightly unfortunate mouthfeel that seems a bit watery*. Rumor has it that this spiced beer is accented with apple pie spice (although I always pegged it as pumpkin pie - then again, the only real difference between the two, according to some recipes, is allspice [apple] in place of clove [pumpkin], while they both, typically, share cinnamon, nutmeg, ginger, and cardamom) added during the brewing process. The finish is a touch thin, but quite grainy, with a solid lingering aftertaste.

* - I attribute these short comings to the fact that the growler sat in my refrigerator for a few days before I tried the beer. The beer isn't overly carbonated, so I think the resting time probably wasn't overly beneficial to the overall experience. If I have it again directly from the tap, or from a bottle, I reserve the right to revise my rating.

Then again, I may be locally biased (I've been to Hooker Brewery many times). Jason Alström, one (there are two) of the (niche-ly famous) 'Alström Bros' of BeerAdvocate.com, thinks this beer sucks. I do get a mild artificial tinge to this beer from time to time, but I hold it in significantly higher regard than some other flavored brews. Finally, one piece of evidence that I'm not (overly) biased in favor of Hooker, when summer rolls around and their Watermelon Ale is available, I will pan that wreck like there is no tomorrow. I haven't reviewed it here before (it's a summer beer and I began the blog during the Fall), I find it absolutely revolting. Then again, I know many, fine, upstanding people who enjoy it.

So, a message I haven't really trumpeted here: Don't take my grading as gospel. Try the beers I review and formulate your own opinion of their worthiness. Also, if you disagree with my conclusions, let me know!
Posted by Unknown at 1:00 PM