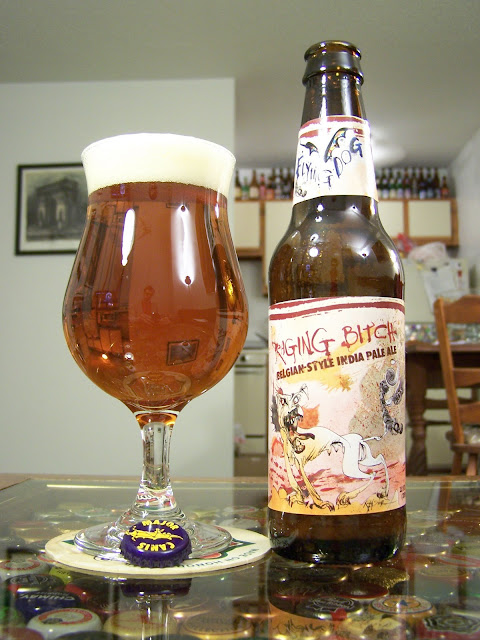 Another bold beer from Flying Dog, this vulgar brew is an American-made, Belgian-inspired take on the india pale ale. It pours a surprisingly crystal clear orange-tinted amber body with quite high active carbonation. The head is of healthy size with a yellowed hue. Orchestrated by a light crackling sound, the foam slowly dissipates and leaves bits of lace on the glass. The nose of the beer is very hoppy with some underlying and slightly doughy malts. The 'Belgian' component also comes through on the nose with a slight musty character and minor coriander spicing. There are definite hints of the popular Belgian Witbier style to be found here.

The hops are bitter with a certain acidity. The sticky sweet malts only barely eek out beneath the hops. The beer seems quite strong, but not really heated. It's clear, though, that the considerable hopping is masking some of the beer's 8.3% ABV. As it spends some time open and warming, the beer seems to open up a bit allowing some of the caramel nuance to make an appearance. The finish is slightly herbal and spicy, but the Witbier-like qualities of the nose seem largely lost on the tasting. I think it's less lack of attention to detail that understates the Belgian influence, but that the tremendous hop character of a powerful IPA tends to dominate the palate, leaving little room for subtlety.