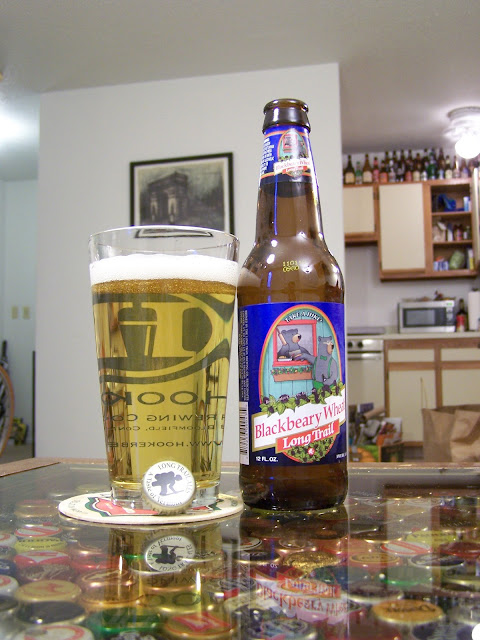 Blackbeary Wheat is a mixed wheat and barley malt beer with a supposed 'hint' of blackberry flavor. The beer is extremely light and pale. While pouring it, it appeared more like water than beer at all. In the glass, however, the crystal clear pale straw stands proud. It pours with a medium frothy white head that has moderate retention. The active carbonation is abundant.

The nose is dominated by candy sweet artificial-seeming blackberry scent. There's malt in there somewhere but its difficult to discern on the nose. The sweetness comes straight from the nose and dominates the front of this beer. The malts push their way through in the middle, but they're thin and seem sour in comparison to the flavor attack. It also seems as if the wheat malts get lost in translation here. Finally, the beer finishes up with a mildly unpleasant sugar-coated feeling for your teeth.

This seems to be one of the many flavored/fruit beers that I just don't like very much. Abita's Pecan Harvest was a major bust for me and I've been similarly dismayed by Hooker's Watermelon Ale and Magic Hat's #9 and Wacko beers. I've heard many good things about this beer, so if you're into flavored beers, definitely give it a try. I'll continue to look for a flavored beer I can get behind, but it may be a while. The next, and more promising candidates will probably be some fruit flavored Lambics like Kriek.