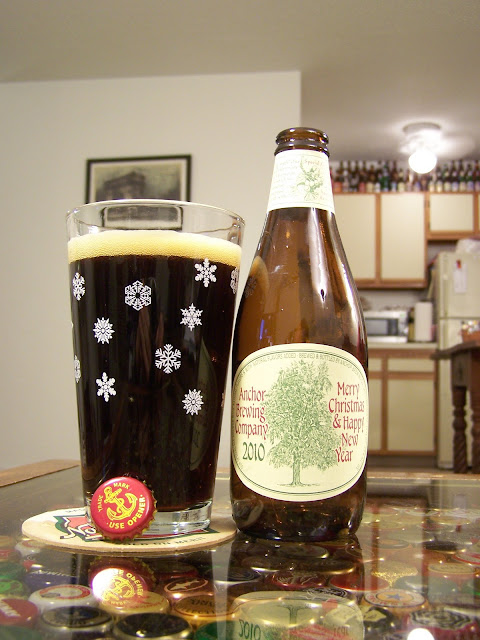 I'm a bit late to the game on Anchor's special 2010 Christmas Ale, but I'm glad I made it. I'm hoping I can find a six-pack of this around somewhere soon, before I have to wait 11 months to have it again. The beer, a 'Winter Warmer' has a dark body with a ruby glow that lets only hints of light through. The head is medium-sized tan foam with a mildly creamy consistency. The retention on the head is moderate.

The nose is predominantly dusty and earthy. Underneath there's a vague licorice scent among hints of chocolate and a moderate bitterness. The beer is initially a fair bit spicy with a complimentary sweetness, which gives the beer an almost dessert-like quality. After only a second or so, the beer is seemingly transformed by a meaty, almost salty flavor and a very light smoke that adds considerable depth.

Overall the mouthfeel is creamy and lends itself well to cold-weather drinking. The finish is a bit herbal and a coffee-like aftertaste lingers for some time. I'm a huge fan of this, and I'll have to find it again somewhere soon.

Final Verdict: A
Posted by Unknown at 1:00 PM