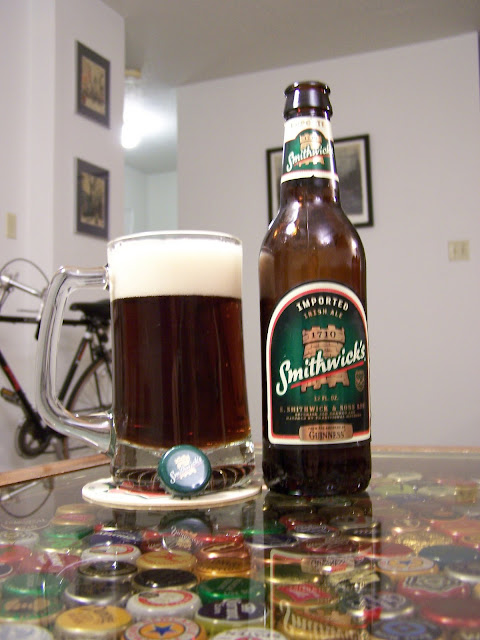 Smithwick’s
Purchased From: Plumsted Buy Rite Liquors
Serving Type: 12 oz. bottle, poured into a mug
Smithwick’s, pronounced Smiddick’s or Smittick’s (but certainly not Smith-wick’s) is an Irish Red Ale from the Guinness Brewing Company. Because of the popularity of Guinness (the beer) in America, the label is quick to let you know who brews this quality Irish import.
Unfortunately, I failed miserably on the handling/storage of this beer. When I opened it I was surprised by the lack of fizz sound when I popped the cap. To my dismay, when I poured the beer I noticed that there was a sizable chunk of ice floating in the bottle. You’ll see that this didn’t seem to negatively affect the beer (to any serious extent), but I’m not content with reviewing this one bottle and letting the rating sit in stone.
The beer pours a clear brown body with a yellow-glowing base and a very large light tan head resulting from a vigorous pour. Small brown flecks decorate the foam, which carries excellent retention and neat, but pronounced lacing. The nose is earthy and chocolatey with a mild aroma of cinnamon and nutmeg.
The flavor is seemingly more intense than I remembered (maybe because some of the water was frozen off?), but quite tasty. The toasty malt sweetness is like a warmed caramel. The taste goes a bit thin mid-palate, but moves nicely into a crisp finish with a lingering biting dryness and light caramel sweets.
Final Verdict: B+*
*Despite the fact that this Smithwick’s was actually quite enjoyable, because it was partially frozen when I opened it, I plan to review it again. So, I reserve the right to amend my rating. However, despite my mishap, this is still a high-quality standby.
Posted by Musings on Beer at 4:00 PM