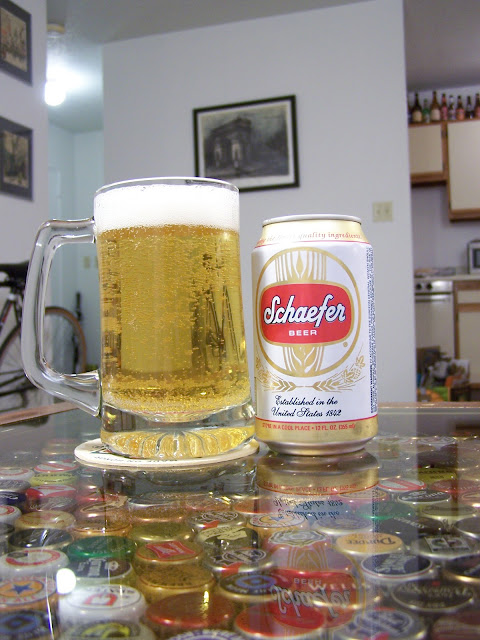 Schaefer
Purchased From: Plumsted Buy Rite Liquors
Serving Type: 12 oz. can, poured into a mug
Upon this writing I realized that I improperly attributed the historical #1 beer title to Old Milwaukee. As soon as I’m done here, I’ll amend that review. It was, indeed, Schaefer that sat at #1. Further, I erred in recognizing the title as #1 in America, when Schaefer was actually the best selling beer in the world. My apologies. Anyway, here’s what I said in my mis-attribution:

Old Milwaukee Schaefer, once the best selling beer in America the world has fallen from its prominent spot to the pits of the beer world. Only a few short decades after the brand ceded its top spot to Budweiser, [it] now toils in obscurity. Is the beer’s fall from grace justified? Likely. Is Budweiser’s top [spot] in the American market justified? Far from.

Today, like many of the older, now obscure brands Schaefer is owned by Pabst and contract brewed by MillerCoors. The beer’s pour is quite attractive with a well-sized head and a glowing body. The medium-light straw liquid is clearly over-carbonated, and the light wispy head subsides rather quickly. No lacing to speak of. Mild hops on the nose give the beer an initial Pilsner-like quality. Also on the nose are must, sweetness, and soapiness.
The malts up front are very crisp and meet a light but pleasant hop infusion. Soon enough the adjunct grains kick in and the sweetness goes into overdrive. Sugary to say the least. There’s also a somewhat artificial tinge to it. The mouthfeel stays airy and carbonated throughout. The finish leaves an unfortunate sickly cloying sweetness. But hey, $3.69 per six-pack is a deal.
Final Verdict: D+
Posted by Musings on Beer at 4:00 PM