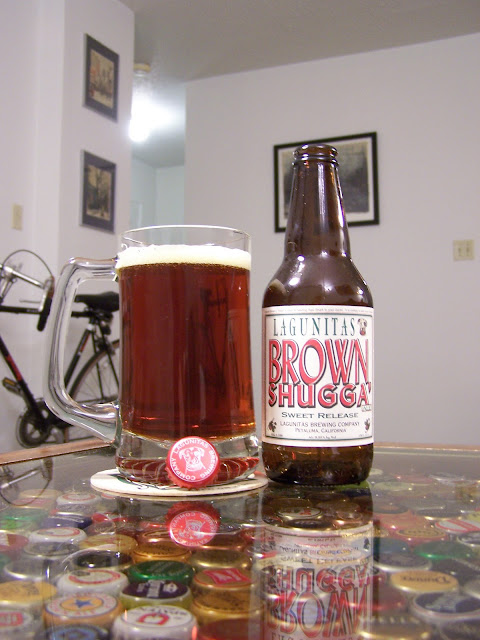 Lagunitas Brewing Company - Brown Shugga’ Ale
Purchased From: Harvest Fine Wines & Spirits
Serving Type: 12 oz. bottle, poured into a mug
Lagunitas’ Brown Shugga’ Ale is exactly what it sounds like, an ale chock full of brown sugar. It pours a light clear brown with cherry hints and a thin, but long-lasting syrupy tan head. The nose is spicy backed up with a crisp hoppiness. There’s also an alcoholic sweetness paired with some candied fruits in the background.
The toasted malts add a molasses character to the beer, but the added brown sugar really makes a palatable impact. The brown sugar, which is added directly to the brew kettle, adds a ton of extra sweetness and extra alcohol. The alcoholic tinge comes in a bit late, riding a wave of sugary sweetness. Both of these components linger on the finish and the alcohol carries a bit of a drying edge.
Final Verdict: B-
Posted by Musings on Beer at 4:13 PM