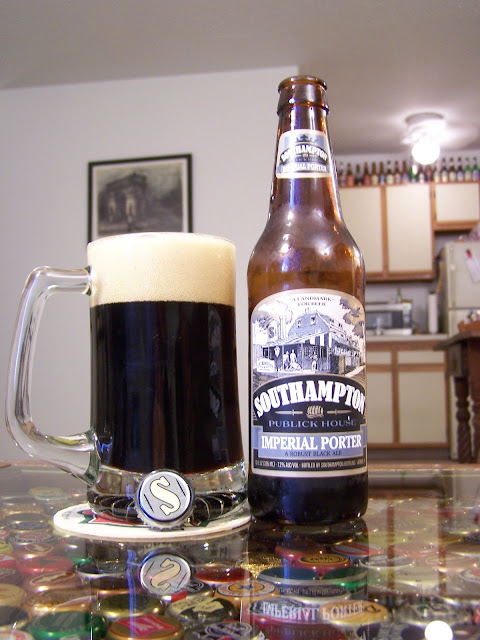 Southampton Publick House - Imperial Porter
Purchased From: Harvest Fine Wines & Spirits
Serving Type: 12 oz. bottle, poured into a mug
A few months ago I tasted a pumpkin ale from Southampton, and today and tomorrow I’ve got an additional two beers from the New York brewer, bottled in Latrobe, PA. Latrobe, of course, used to be the headquarters for Rolling Rock. The brand was purchased in 2006 by Anheuser-Busch and the Pennsylvania brewery was shuttered.
The Imperial Porter has a deep mahogany brown body and a ruby glow. The large creamy tan head has tremendous staying power and produces ample and intricate lacing. The nose is interesting and complex. Up front chocolate and caramel define the nose in a common-place fashion. What’s unconventional is a clear, sweet, almost citrusy and sticky hop aroma. Hops are not rare among porters, but hops with such a prominent citrus profile are more unusual.
The beer is very sweet and light up front, but slowly transitions to abundant earthy chocolate tones. Next up is a mid-palate defined by a deep toffee sweetness. As the flavor begins to round out the sweetness subsides and roasted malts with a coffee character steps to centerstage. The finish is pleasant and lingers with a mellow charred smokiness.
This drink is like a performance in a glass. It moves elegantly among a range of flavors that define the beer. Each stage in the profile is clear and defined, but overall the beer moves effortlessly between them creating a single, delicious, beer-drinking experience.
Final Verdict: B+
Posted by Musings on Beer at 4:00 PM