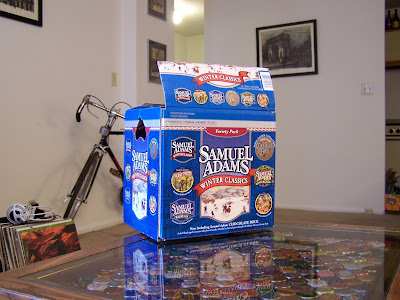 Coming up, starting tomorrow, will be each of the beers from the Samuel Adams Winter Classics variety pack. It’s a 12-pack featuring two bottles each of six different ‘Winter Classics.’ Well, really it’s five seasonal beers plus Boston Lager.
It’s been a while since I’ve actually had Samuel Adams, and I realize that I’ve been discounting the entire Boston Beer Company for some time. It’s hard to come to a conclusion of exactly why, but it is likely a mix of the familiarity of the beer in comparison to my ever-expanding quest for the new and interesting with a disappointingly real elitist beer-snobbery.
The Boston Beer Company is the largest craftbrewer in the country. So large, in fact, that by legislated designation, they’re about to outgrow the term. Last I heard there was a bill introduced by a Massachusetts senator to increase the production limit for small brewers. I’m sure Jim Koch at the Boston Beer Company did some pleading to make that happen. Who can blame them, though? While they’re technically about to move into the big leagues, they’re clearly different than the macros. They’re a real success and the bright, shining example that shows that the mass-market really does like real beer, brewed with quality ingredients for actual flavor. They helped spark the craftbrew revolution in America, and for this, I’m not against realigning the rules.
So, this week I’m putting my bias aside, fending off cognitive dissonance, and giving these six varieties a fair shake. As of writing this, I’ve already tasted a few of the beers and I’m very glad that I picked up this sampler. Stay tuned.
Posted by Musings on Beer at 8:24 PM

Email ThisBlogThis!Share to TwitterShare to FacebookShare to Pinterest
Labels: Update