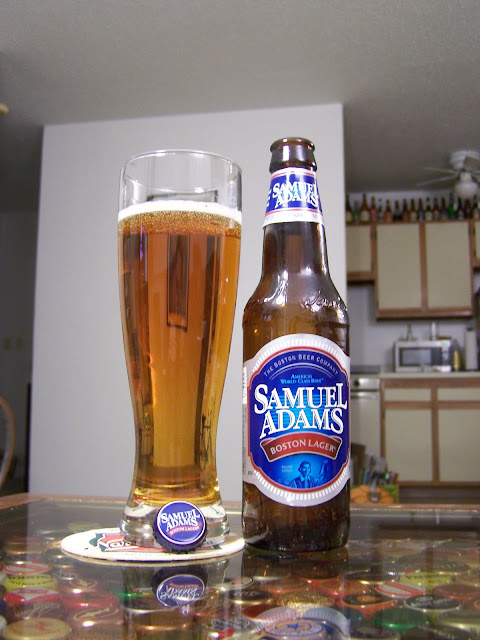 Samuel Adams - Boston Lager
Purchased From: Harvest Fine Wines & Spirits
Serving Type: 12 oz. bottle, poured into a pilsner glass
Boston Lager, interestingly enough, is an interpretation of a Vienna Lager, which is not extremely common anymore. The style has faded in prominence, but immigrant brewers who came to the Americas in the laste 19th century brought the style with them and there are a handful of well-known beers in the style, most notably Boston Lager and Dos Equis Amber, today.
It pours a very brown-tinted amber body, although the color is fairly light and clear overall. The color almost reminds me of a dark whiskey. The small white head didn’t hold up for too long, and left very little lacing on the glass. The nose has caramel malts and a light spice along with a mild bitter hops aroma.
The flavor is much different than I remembered. Not only is it seemingly lighter, there’s an underlying spice that I’d never noticed before. The earthen malts are clear up front and present a slightly woody character. I almost sensed a bit of cinnamon. There’s a drying bitterness to the flavor, but the Nobel hops are a bit weak overall.
I really enjoyed this beer, but it seems different than I recalled it. I’m not sure if they changed the recipe a bit, or if my memory has just been muddled since I last had a Boston Lage.
Final Verdict: B
Posted by Musings on Beer at 4:00 PM