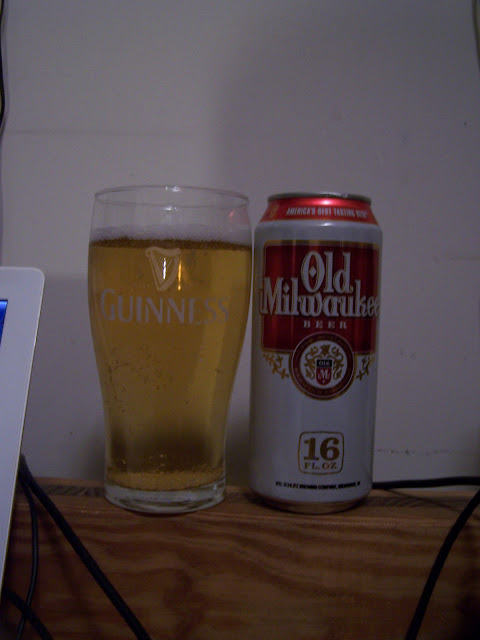 Old Milwaukee
Purchased From: Plumsted Buy Rite Liquors
Serving Type: 16 oz. can, poured into a Guinness pint glass
This beginning paragraph was mis-attributed (by me) to Old Milwaukee. It tells the tale of Schaefer. That review will debut on Thursday December 2, 2010. Old Milwaukee, once the best selling beer in America has fallen from its prominent spot to the pits of the beer world. Only a few short decades the brand ceded its top spot to Budweiser, now it toils in obscurity. Is the beer’s fall from grace justified? Likely. Is Budweiser’s top stop in the American market justified? Far from.
Old Milwaukee now exists in the brand portfolio of Pabst Brewing Company. It was originally introduced as a budget beer by Schlitz. Schlitz and its brands were eventually purchased by Stroh. More recently, Stroh and its brands were acquired by Pabst. All of Pabst’s brands are contract brewed by MillerCoors.
The beer pours a pale straw body, overloaded with carbonation. The initial head is frothy and decent in size, but can’t muster anything substantial in the way of retention or lacing. The sticky sweet corn nose is mildly unpleasant and backed up with a fizzling sour graininess.
The high carbonation and ice cold serving temperature do all that they can to hide the beer’s flavor. There’s a corn sugar sweetness to it, but the flavor is thin overall. There’s barely anything discernable as far as barley malt goes. As the beer warms up the faintest taste of hops appear, but they’re far too late to do anything for this beer.
On the bright side, this stuff is cheap. A six-pack of tall boys goes for about $4.50 and its light enough to drink a few. A maintenance beer, perhaps.
Final Verdict: D-
Posted by Musings on Beer at 4:00 PM