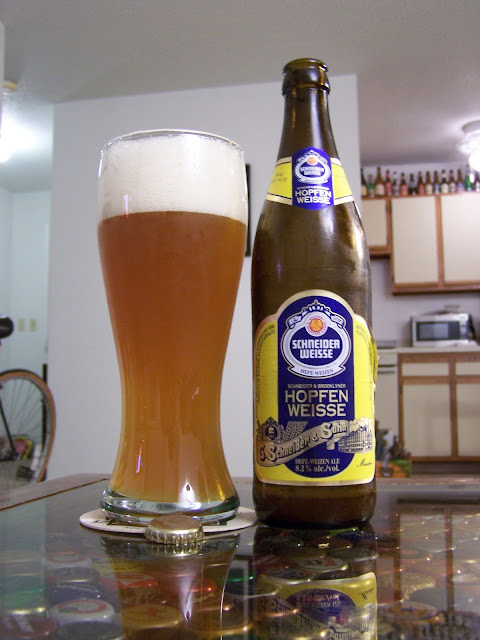 Schneider-Brooklyner Hopfen-Weisse
Purchased From: Wallingford Wine & Spirit Company
Serving Type: 500mL bottle, poured into a weizen glass
Hopfen-Weisse is an interesting collaborative creation by Hans-Peter Drexler of the Schneider brewery and Garrett Oliver of The Brooklyn Brewery. The brew masters, fans of each other’s work, as the tale goes, decided to team up to produce a unique beer, using the other’s brewery. This is their experiment, as produced at the Schneider brewery. I’ll keep an eye out for, and hopefully review, the Brooklyn half of this equation.
The body pours with a light orange hazy glow, diffuse with silky yeast left over from bottle conditioning. The nose is extremely hoppy  and carries a slight must. The large head is full of tons of very crisp carbonation and produces considerable lacing.
There’s a slight astringency to the wheat malts. They produce a sweetness to balance out the bright hoppy character of this beer. There’s an intense and delicious citrus character to it, reminiscent of fresh grapefruit. The hallertauer hops used in brewing are clear, but they mix well with the wheat malt to create a very interesting and rare combination.
The beer is certainly strong, but hides its alcohol well. At 8.2% ABV, suppressing the alcoholic esters is a nice feat.
Final Verdict: B+
Posted by Musings on Beer at 1:18 AM